Nicky Campbell, in The Guardian, examines whether “The McLaren Principle” of commentary is still being 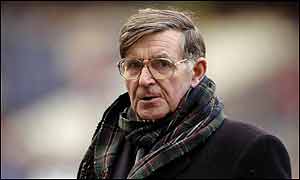 Last week I chaired a session at the BBC News and Sport Festival entitled Pick of the Pundits. I think it is what Doctors call an “internal”. There we were on the fifth floor of the White City General, taking a long, hard, surgically gloved look at how we work. Does commentate mean pontificate? Does analyse mean criticise? After we finished, Jeremy Vine was coming in to grill Mark Thompson on the licence fee settlement. The significance of that on the battle for future rights is a whole different ball game and as the song goes, “let’s hang on to what we’ve got”.

The Six Nations is along soon and already it seems a long gone era when the great Bill McLaren (pictured) was the lyrical and evocative voice of rugby. In his wonderful and moving autobiography, McLaren wrote: “There is nothing worse than a commentator who is blatantly biased. You are not being professional and doing your job properly if you are guilty of that.” And McLaren was, true to his maxim, unimpeachably impartial.

But a lot of licence payers do not want England to win? “Well that’s their problem.”

One celebrated scourge of the BBC is former spin doctor Alastair Campbell. You might remember he accused the corporation of being anti-war. After the World Cup he claimed that the Beeb’s television coverage had strayed a long way from the McLaren doctrine and was merely an extension of the England fan club. This, Campbell asserted, prevented the BBC from doing the job of informing, explaining and analysing

Click here to read the rest of this article.

And click here to nominate your Sports Broadcaster of the Year.