From Brendan Gallagher, Daily Telegraph
Just when you thought the flag-flying, morale-boosting days of Donald Campbell 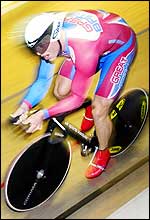 and Neville Duke had disappeared – along with memories of the Empire, black and white TV and England beating Australia at Lord’s – a brave Brit is again attempting to become the fastest man in the world.

Chris Hoy, the winner of two gold medals at the recent World Championships in Palma, has set out for the world’s highest city – La Paz in Bolivia, which is perched at the bottom of a crater 12,001 feet up the Andes.

Next weekend at the Alto Irpavi Velodrome – the highest gate-taking sports arena in the world – he will attempt three world records which, if successful, will establish the Flying Scot as the fastest man ever on self-propelled wheels. His banker is the 1,000 metres (kilo) at which he is already the Olympic and world champion and holder of the fastest time at sea-level. If that is successful he will go for the quick-fire 200m and 500m events.

There is a risk element in going to La Paz, which in sporting terms is so high that some of the advantages of thin air can be offset by the possibility of acute altitude sickness. And although the 200m and 500m events are purely explosive, perfectly suited to altitude, there is an endurance element to the kilo that means only the supremely fit will ride significantly better at 12,001 feet than at sea level. Hoy, by any criteria, is supremely fit.

When Frenchman Arnaud Tournant set the world record of 58.875sec at

La Paz in 2001, he reportedly lost consciousness for 20 minutes after crossing the finishing line before recovering. Hoy’s sea-level best of 1min 00.71sec is nearly.40sec quicker than Tournant’s best time away from altitude, but there will be other variables on the 333m concrete outdoor track, such as wind and rain.

Altitude sickness can also strike seemingly at random and often affects the fittest and best. A couple of years after “knocking off” Everest with plenty to spare, Sir Edmund Hillary – as fit and tough a Kiwi as ever left New Zealand – suddenly found he simply couldn’t function in the high Himalayas any more. Henceforth he had to divert his attention to general exploration and setting up community projects for the sherpas in the foothills.

By way of preparation Hoy was at the English Institute of Sport (EIS) at Bisham Abbey last weekend where they have installed the biggest climate chamber in Europe – it took technicians nearly seven hours to gradually suck out the air and replicate conditions at 3,417m.

“I spent an hour and 40 minutes in the chamber and did my full competition warm-up drill and touch wood felt pretty good. I then came out and did two of my full-on lactic tests which I occasionally endure to see exactly where I am.

“It involves sprinting full throttle for 30 seconds, resting for a minute and then doing four reps. I was half dead by the end and the pain goes on for 10 minutes or more after you finish. I just have to curl up like a baby on the crash mat. It’s by far the toughest work-out I ever do. I imagine I will be feeling exactly the same after the kilo in La Paz. I then did another set an hour later. I am happy to report I was 5 per cent up in terms of power produced on my previous best. If nothing else I am in shape.

“So it’s now or never and also I fancy a little fun and a once in a lifetime adventure – an old-fashioned challenge if you like after a long series of big championships. I have trained like a maniac since the worlds while everybody has been taking a rest, and we have put a huge amount of effort into getting everything to come together, but I am relaxed about the outcome and determined to enjoy the ride so to speak.

“As far as the kilo is concerned it is my first love and my Olympic gold-medal event but it has been dropped from the schedule and Palma was my competitive swansong. I will never be ‘kilo fit’ again – it’s a strange combination of huge top end speed and a small, but vital, dollop of endurance. La Paz will be my farewell to an event that has shaped my sporting life.

“The 200 and 500 record attempts are a bonus – I am there so why not give it a blast? I am doing more and more pure sprinting as part of the GB Team sprint squad and my keirin racing [Hoy is the world champion] has also sharpened my speed. I am in the shape of my life and I will never be in La Paz again. Now is the moment.”