By Steven Downes
We, as sports journalists, stand accused of complicity by the latest issue of the British Journalism Review. We are said to be witting parties to turning what ought to be objective reporting into little more than advertorials draped around the odd football match or track meeting.

“News is what someone wants to suppress. Everything else is advertising,” was the view of Rubin Frank of NBC.

I was reminded of that again the other day when the phone in Downes Mansions rang, and a very pleasant young woman from a PR agency was on the line. There’s an international championship coming up, and the new sponsors of this particular sport in Britain wanted to send me to the event.

All flights and hotel costs (and a very nice hotel, too) would be looked after, and there was even an invitiation to dinner with the sponsors’ chief executive before the event began. All I’d have to do is to get a couple of reports on the event into print, maybe do a radio two-way as well. The newspapers and radio stations would pay me, I’d have no costs, and at no point did the PR mention whether “the client” expected to get a mention. A freelancer’s nirvana. What’s a boy to do?

Say “no” might be the simple answer. But would it do any good? There was one esteemed colleague who steadfastly refused ever to accept the various dodgy T-shirts doled out to us hacks at accreditation desks around the world. But still the T-shirts keep coming. And what sports journalist has never supped with the devil, or at least had a glass of chilled Chablis provided with some food at an event at the sponsor’s expense?

Too much “top-level”, professional sport these days is staged less out of any true competitive purpose, but simply to deliver some extra airtime for the sponsors.

The recent, two-day athletics international in Birmingham was one case in point: the event was organised without, according to one senior national coach, any proper reference to UK Athletics’ performance department. The marketeers needed to fulfil TV and sponsor obligations. But how many athletics writers hedged their reports with a “health warning” for their readers that the event was little more than a circus performance, rather than real sport?

Eamon Dunphy, the former Irish football international turned outspoken pundit, rails against what he has called the “soft consensus” in sports reporting, something which Professor Raymond Boyle, in an article in the latest edition of the British Journalism Review describes thus:

Much of what passes for journalism in British television coverage of football exists within an all-too-cosy network of ex-players and current managers. The few journalists involved seem unprepared to risk upsetting this closed world by asking difficult questions.

Professor Boyle, a career academic based at Stirling, warms to his theme as he turns to newspapers’ short-comings on their sports pages, too: “In the increasingly overtly commercial world of media sport, largely anodyne interviews in the sports, features or magazine pages of the print media often appear to be adverts for a range of endorsed products.

“Secure an interview with Michael Owen, but make sure some explicit references to the sponsor organising access, such as Tissot watches, appears in the piece… Within these constraints even the most experienced of journalist can struggle to turn a turgid PR-staged interview into anything remotely insightful.”

Prof Boyle cites the examples of World Cup “columnists” Alan Shearer and Geoff Hurst, pictured, whose copy was bought and paid for by Continental Tyres and McDonald’s, respectively. In these days of ever-tightening budgets, such cheap, or even free, “star name” copy is embraced eagerly. But how often does it actually deliver anything of real value to the reader?

The compromise goes further. Take the pundits in the BBC and ITV studios: was Shearer or Terry Venables ever likely to be overtly critical of the England team’s performances in Germany when both were being courted at around that time for a job with the post-Eriksson coaching staff?

“Framed by entertainment rather than journalistic values and with too many vested interests involved, football coverage on television tends now to be driven by soft opinion rather than hard analysis. Television often appears to see its role as promoting sport, rather than reporting, investigating and analysing,” says Prof Boyle. 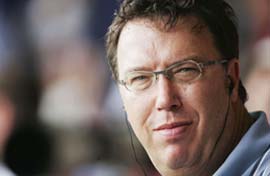 Football is not alone. The “soft consensus” was found last week in the cricket press box, effectively neutering the coverage of that sport’s latest crisis. How could Michael Atherton (dirt in pocket) or Derek Pringle (pictured, who admitted his own ball tampering when playing) possibly take the moral high ground against Pakistan?

And what of the valued opinions of the man who once described Pakistan as “the kind of place to send your mother-in-law for a month, all expenses paid”? Ian Botham’s legal track record, following his lost libel case against Imran Khan, may well have had an influence on his analysis of the situation at the Oval Test.

As Prof Boyle says in his BJR article: “Too many journalists and former sports people abdicate their responsibility to report honestly because they may upset important people or damage their own career trajectory.”

But this is about much more than the old hack’s complaint against former pros who stroll straight from dressing room to press box. For now, with increasing pressures on sports desk budgets and ever-diminishing returns for freelancers, there is a growing trend for journalsts to be paid for.

It is a practice that has been prevelant on business, fashion, motoring and travel desks for decades: PRs offering attractive foreign trips, in return for some tailored copy a few weeks down the line. The Independent, at its launch in the 1980s, took the high moral ground in banning all such “freebies”.

But elsewhere in journalism, the practice is so widespread as to be almost unavoidable. Reuters, the international news agency, applies a high-minded “no freebies” policy for its own staff; however, if freelancers are paid by a sponsor to attend an event, it has tended to turn a blind eye, take their copy and pay its stringer its modest lineage rate.

And herewith comes the mea culpa: earlier this month, I covered the European athletics championships at the expense of the local organisers. Together with three colleagues, we were paid to provide an agency news service on the meeting, which appeared on the event’s website and in the press centre. Hand on heart, I never once wrote a sponsor’s name into my copy.

There are some sports events, and their faithful sponsors, that are so starved of mainstream exposure in pages or on channels dominated by football, that they are increasingly directing their marketing spends towards sports journalists and television producers. One non-Olympic sport governing body recently paid all the TV production costs for a series of international matches, in order to give the resulting footage to a terrestrial channel, and thus ensure its sponsors got the coverage they crave. No where in the broadcast programme was any caveat mentioned that “this segment is brought to you by Sudsy Suds”.

Yet this insidious, sponsor-satisfying technique is spreading ever further, to the perhaps esoteric pages of your local newspaper, and even to a professional sportswriters’ organisation near you.

For the specialist writers of one major Olympic sport have arranged to have their annual awards dinner sponsored and organised by the marketing agents and self-same major sponsor of the sport which they are supposed to be observing objectively throughout the year.

And one “news” agency is now shamelessly plugging its own subscription to the “soft consensus”.

The agency’s website reports that its “coverage of major athletics events in 2006 will be supported by Norwich Union”.

“Supported”? By the insurance company that is pumping millions into the very sport that this agency is supposed to be reporting on objectively?

The shameless admission on the news agency’s website continues: “Copy provided to the agency’s network of regional press titles will be branded to reflect Norwich Union’s £50 million six-year commitment to UK Athletics… The service will be available…and sports editors will be able to take advantage of preview and live copy, free of charge.” But at what price?

Just in case you were wondering, I found something else to do this weekend, so I won’t be taking up the PR’s very kind offer of their freebie.

Click here to read last week’s SJA Sports digest, on the growth in the number of sports journalism degree courses.

The views expressed in this article are those of the author, and do not necessarily reflect the position or policy of the Sports Journalists’ Association