There’s an old saying about old boxers. They’re always the last to know. 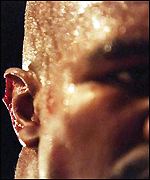 It’s a curse for great athletes that most can’t seem to recognise when that brilliant response isn’t there anymore. And it’s a curse for boxers that in their sport, you have to decide for yourself that you’re done. You can’t get cut from the team.

So we have the case of the former world heavyweight champion Evander Holyfield, at the age of 43, scheduled to climb through the ropes Friday night in Dallas to fight a 32-year-old insurance salesman from West Virginia by the name of Jeremy Bates.

Read the rest of this insightful piece on Salon.com here.