The hug on the 16th green at the K Club on Sunday said so much: the gesture from 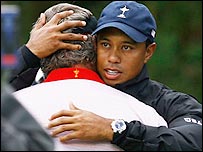 Tiger Woods demonstrated the world’s top sportsman also has a deep vein of class and compassion, while the tears in the eyes of Darren Clarke showed that the man from Dungannon had had someone else at his shoulder throughout the three days.

Six weeks after the death from cancer of his wife, Heather, Clarke had quaked ever so slightly on the 1st tee on Friday when part of a European Ryder Cup team once more, thanks to a vote of confidence in his selection from captain Ian Woosnam. Clarke’s first drive that day justified that selection immediately.

And after two days in which Europe had won each session of foursomes and four-balls, Clarke’s position on the starting order for the final day’s singles matches looked like Woosnam’s attempt to choreograph it so that the Northern Irishman would secure Europe’s record-breaking third successive Ryder victory. Yet such was the Europeans’ domination of the singles, the Cup had already been won by Europe as Clarke holed the winning put against Zach Johnson for his third point of the competition.

While nothing can ever make up for the pain and suffering of the Clarke family, the response of the Irish crowd 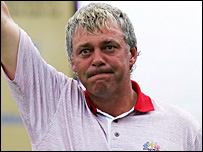 and the reactions of his fellow pros, not least the rival Americans such as Woods, did much to show sport at its very best.

“Being part of this team has done a lot for me and for people who have shown how much they care about me and Heather,” Clarke, right, said.

“There are too many memories for me to list but my team have been unbelievable all week, so have the American guys, their wives and the crowd – their support has been incredible.”

Europe’s exultant success in the Ryder Cup may have also offered up candidates for the SJA Sportsman of the Year Award in Clarke and his team mate, Colin Montgomerie, as well make them collectively hot favourites for the Team award.

The choice of Clarke as Sportsman of the Year might acknowledge the flood of emotion that flowed in spate through the K Club where the River Liffey normally runs.

As Denis Walsh noted in the Sunday Times:

Clarke and Westwood travelled by buggy back to the clubhouse and skirted the practice range as they went. A couple of European players with their coaches were preparing for the afternoon play; they stopped and applauded, their faces beaming with heartfelt good wishes. It wasn’t just that the heavyweight pair of Woods and Furyk had been knocked to the canvas again; more than that, it was another point for Clarke, and this week both of his points have exceeded their face value. 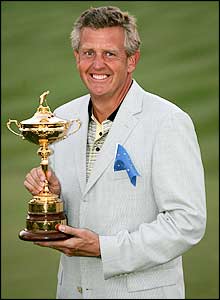 Casey, after all, had a week earlier won the World Match Play title at Wentworth, and at the K Club, his defeat of world No2 Jim Furyk provided the final day foundation that the European team needed.

Indeed, for Montgomerie, pictured right, a golfer who is constantly reminded of not having won a Major, this was his sixth Ryder Cup singles win, putting Montgomerie alongside the likes of Arnold Palmer, Lee Trevino, Sam Snead and Nick Faldo. With a career tally of 24 points, if Montgomerie is selected for Louisville in 2008, he will stand an excellent chace of bettering Faldo’s European career record of 25.

The three days of golf at the K Club outside Dublin was full of magical moments and heroes – Casey’s hole-in-one in Saturday’s foursomes being among the most notable, Sergio Garcia’s usual buccaneering all-round play a constant source of gasps of astonishment from the galleries (“Garcia has said that he lives for the Ryder Cup. Woods looks ill just at the thought of it,” was the way that the Sunday Telegraph‘s Mark Reason put it).

But the sheer compassion and humanity that surrounded Darren Clarke will be something that stays in the memory for a very long time.

Voting is now open to SJA members for the Sportsman, Sportswoman and Team of the Year.

Review the other leading candidates in each category for your consideration:

To book your ticket for the SJA Sports Awards on December 13, click here.

And click here to fill in a membership form and put yourself forward to join the SJA.