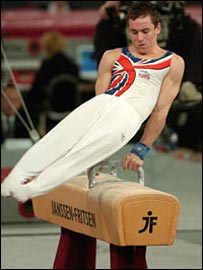 for five years to win a medal at the European gymnastics championships, when he took silver in the pommel horse competition in Amsterdam.

Team mate Louis Smith nearly made it a double celebration for Team GB but was just edged out of the podium places.

The last British male competitor to win a European medal was Kanukai Jackson in the vault in 2002.

A delighted Keatings said: “I’m thrilled, I came here to make a final but never expected a medal, so I’m over the moon.”