ALISDAIR REID looks back with fondness at the tradition of the Barbarians, but doubts whether they have any future in the modern game

There are dirtier little secrets in this life than to own up to a fondness for ESPN Classic, the sports nostalgia channel which feeds its 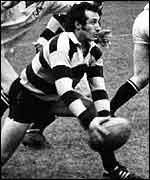 terminally tragic viewers a daily diet of flickering footage from the dim and distant past. Last week it positively glistened as it replayed a series of Barbarians matches from the 1970s.

Of course, the highlight of it all was that epic Cardiff contest of 1973 when the Barbarians took on – and beat – the touring All Blacks in a match many still consider to be the greatest ever played. More, still, are convinced that its opening minutes produced the try that will forever be hailed as the greatest ever scored.

A Proustian blast of brilliance from rugby’s gentler age? Not a bit of it. JPR Williams, the great Welsh full-back, was almost decapitated twice in the build-up to Edwards’ score, and the match was unrelentingly fierce

throughout. The All Blacks had seemed to go out of their way to make themselves unpopular on that tour – their prop, Keith Murdoch, was sent home for punching a guard at a Cardiff hotel – and the backdrop to it all included the Lions’ Test series win in New Zealand in 1971.

There was needle aplenty that day. The match mattered. In an era when international careers passed in a twinkle, it offered many of the Barbarians players the rare chance to take on the All Blacks on British soil. They went into the match hell-bent on victory.

The point is worth making to counter the silliness of the claim that the Barbarians reached their zenith playing candy-floss rugby or something close to souped-up sevens. Instead, their greatest day was a real rugby match, harsh and hard-nosed, and the real glory of the Edwards try is that it was scored in the face of fierce physical and mental pressure. That is the legacy, the real Barbarians tradition.

But let us bring the story up to date. In just under two weeks, on December 1, the 2007 Barbarians will take on South Africa at Twickenham. On paper, it ought to be an appetising contest, given an extra layer of meaning by the Springboks’ recent World Cup triumph. In reality it will be a rugby irrelevance, a thoroughly pointless game that will further undermine the noble traditions of a club whose claim to be the world’s greatest invitational side looks shakier and shakier with every game they play.

That much became obvious the other day when John Smit, the South African captain, was ruled out of the match by Clermont Auvergne, the French club he joined after collecting the Webb Ellis trophy last month. Smit’s new employers will release him for the Springboks’ match against Wales next weekend, but with domestic championship commitments of their own they would rather have him back at his day job rather than taking part, and risking injury, in a seasonal jolly at Twickers.

Indeed, a remarkable number of South Africa’s World Cup squad had already decided that they, too, could forgo the dubious delights of yet another trip to Europe. When Victor Matfield pulled out of the tour last week, he became the 12th recent Springbok to rule himself out of the short tour, a dilution of the strength of the party that could yet produce a win for Wales against the world champions.

But if the South Africans are unrecognisable when they pitch up at Twickenham the following weekend, their Barbarian opponents will be an even more motley crew. England’s Guinness Premiership sides have agreed that none of their players will be released for the match, a blanket ban that is being matched by Ireland’s sides despite the appointment of Eddie O’Sullivan as Barbarians coach.

So the Barbarians will have to scrape together a side from the outer reaches of the game, a few peripheral players here, a few retired internationals there. In other words, they will have do pretty much what they have been doing for the past dozen years, cobbling together a team who wear the great old shirt but do nothing to enhance the great old tradition.

Scotland has already virtually ditched the idea of playing the Barbarians on a regular basis, finding nothing particularly enriching, in any sense, in the experience of taking on the sort of creaky collection of superannuated Antipodeans that is their typical team these days. Which is why the time has finally come to lay the Barbarians to rest, a fondly remembered icon of rugby’s amateur past rather than a shambling embarrassment of rugby’s professional present.

No doubt the suggestion will cause spluttering apoplexy among their blazered old bufties, but the Barbarians have overstayed their welcome and their relevance. They are no longer honouring a tradition, but insulting it. Frankly, they are not fit for the mainstream channels any more.
This is an abbreviated version of an article published in the Sunday Herald. Click here to read it in full