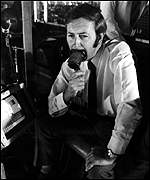 Last night’s television reviewed by Steven Downes
The title might have been a bit of a sidestep, using the name of the 1970s ITV Saturday lunchtime football preview slot, but On the Ball (BBC1) at least made a good effort to be faithful to its sub-title: the story of sports commentary.

The programme also looked like it would be faithful to its viewers. The opening sequence, for instance, re-ran perhaps the very first Colemanball, “…and who cares who’s third?”, in David Hemery’s world record-breaking, gold medal-winning performance at the 1968 Olympics. For in the bronze medal-winning position was Sheffield’s John Sherwood, and such was the embarrassment for the BBC commentary legend, David Coleman, that according to urban myth the original audio has not been heard on the Beeb for such a long time that people had begun to doubt whether it had ever been said at all.

It is widely believed that Coleman (pictured above), in his football mode, developed the shouted declaration “1-0!” into a kind of catchphrase, though this programme demonstrated that “Pele!” might have worked equally as well, had not the man behind the lip-mike in the group match between Brazil and England at the 1970 World Cup had to add hurriedly a sort of mutter that Gordon Banks had made the save of the tournament. Or of all time.

This was a kitchen-sink of a programme, throwing much into its all-too-brief half-hour as it examined the relatively modern journalistic skill of transferring excited thoughts of half-seen events into coherent speech and transmitting it immediately to millions at home. Much of the programme’s delight lay in the glorious sporting clips chosen as, one-by-one, Peters Alliss and O’Sullevan, cricket’s Arlott and Johnson, and Murray Walker all made appearances. Well, alright, maybe Walker was less delightful.

The programme had a sort of stand-off between John Motson and Barry Davies, to represent probably the longest piece of editorial indecision, over which was the BBC’s No1 football man: Motty, filmed amid his anorak’s collection of stats and yearbooks,

spoke of how his father had taken him to Millwall as a lad (surely a child abuse offence these days?), while Davies (pictured left) chatted about his mother’s influence and had his microphone versatility demonstrated across every Olympic sport ever transmitted, with the possible exception of wushu.

For some reason, the producers opted to ask a couple of ex-athletes about their fave commentators, though how Kelly Holmes and James Cracknell could have known what was being shouted at them as they won their four Olympic golds was not addressed.

Cracknell, for his part, added to the programme’s integrity factor when he dug out a little remembered stat first presented in a widely acclaimed book 12 years ago. Talking about the the infamous 1988 Olympic 100 metres final, Cracknell declared that seven of the eight runners that day all subsequently failed drugs tests, effectively pointing out that you could not always trust what you saw on TV.

Which was also something of the feeling about a sequence about Jacqui Oatley, the first woman allowed to commentate on Match of the Day, and, as far as we can check, who has not commentated on a televised Premier League game since.

The ubiquitous Alistair McGowan (staunchly refusing to do any of the commentary impressions which made him famous and which, presumably, was the reason he was invited to be interviewed for the programme), said the media kerfuffle surrounding Oatley was all to do with the tone of a woman’s voice, something which the deeply toned Clare Balding seemed to agree. Too shrill was the consensus.

And when they showed a clip of Oatley’s Fulham v Blackburn commentary, it still sounded as if it had to be re-dubbed post-game, a suggestion which the BBC never fully refuted.

While the Oatley saga was discussed at length, loads of other, more worthwhile material had to be junked. This was supposed to be a history of 80 years of commentary, though I do not recall seeing one clip from before the 1960s.

There was no John Snagge or Raymond Glendenning, no Brian Moore or Peter Jones. Kenneth Wolstenholme’s 1966 World Cup end-game – surely the most famous piece of English language sports commentary ever? – was not shown. We caught only a fleeting glimpse of Bill McLaren, and never heard a peep from the man to determine whether they’d be dancing in the streets of Selkirk tonight.

In the midst of Wimbledon fortnight, Andrew Castle was allowed to witter on about how scruffy his notes are, but nothing was heard of Dan Maskell or John Barrett. Whispering Ted Lowe was so quiet as to be inaudible. Henry Longhurst lipped out.

Rightly, “Aggers” walked us through (again) the day he corpsed with Johnners, and while we had loads from Atherton, Gower and Sir Ian, surely none of them would ever suggest that they are as good in the commentary box as Richie Benaud. Yet nothing was heard of him or Jim Laker. There was absolutely no boxing shown – not even Harry Carpenter’s love-in with Frank Bruno to demonstrate the inability of any living and breathing commentator to become just a little involved.

And when the programme’s editors showed that try against the All Blacks, they somehow managed to omit the lilting lyricism in the commentary (surely the very point of the programme?), as Cliff Morgan virtually recited the Barbarians’ line-up, punctuated only by a few gasped “Briliant!”s, as the ball passed through the team’s hands to Gareth Edwards and the understated “a dramatic start” finale.

Another Coleman catchphrase, What Happened Next? was used as the title for a BBC4 clips programme that revisited a splendid fly-on-the-wall documentary of a decade ago, following Bath rugby club at the dawning of the professional era.

If you missed it, the scenario made for classic TV: unbeatable champions as amateurs; local moneybags pours squillions into the club as the game turns pro; marketing wallahs turn up with ways of making more money; and hey presto!, on the pitch Bath fail to win an egg cup.

We witnessed it all unravelling: Andy Robinson couldn’t get in the team, Brian Ashton resigned, John Hall got fired and at the end of the season, as the accountants moved in, 10 of the playing squad were released.

But by the end, the viewer was left with only a half-picture of where they all are now, and the state of Bath rugby club and English professional rugby. Potless for a decade, Bath actually won a trophy this season, and after England made it through to two World Cup finals in five years, it might have been an idea to seek out others who were in that 1998 Bath squad, such as Jason Robinson and Mike Catt, who both went on to captain England, and the careworn Ashton and Robinson, who both coached the national team.