Can the FA Cup final ever reclaim it’s old status within British society, and on television, with a daylong build-up including Cup final Question of Sport or It’s a Knock-Out?

Iâ€™m sure I heard past SJA chairman John Bromley chuckling in the Great Press Box in the sky this week when it was announced that Saint and Greavsie are coming back to our television screens.

Setanta is bringing the ancient duo out of mothballs in the hope they can give a golden balls touch to their FA Cup final coverage tomorrow. It is, gulp, nearly 20 years since Ian St John and Jimmy Greaves amused, sometimes confused and often bemused viewers with the Saint and Greavsie show on ITV.

A stroke of genius by Setanta, or a joke that is going to misfire? I must quickly own up to having an opinion weighed down with bias. Greavsie has been my partner in 18 books to date, and the Saint has been involved in several of them.

I find them hilarious and time has not tarnished their ability to make people laugh. Jimmy is as funny as any stand-up comedian in the country with his solo stage act, and Ian remains in demand as an after-dinner speaker with a treasure chest of Bill Shankly stories.

When I told Greavsie this week that this is like bringing back Pinky and Perky, he shot back: â€œItâ€™s the MPs with their snouts in the trough, not the Saint and me. Weâ€™re just a couple of old farts trying to pick up some crumbs. People seem to think if youâ€™re not on the box, you must be in your box.

â€œBoth Ian and I think our TV careers were shut off too early, and the temptation will be to open up with, â€˜As we were saying before we were rudely interrupted â€¦â€™.â€

It was John Bromley, then head of ITV Sport, who first brought â€œthe boysâ€ together back in the early 1980s to start a fresh, irreverent and often humorous way of looking at football on TV.

While the BBC was discussing the game with a high and mighty attitude, Saint and Greavsie talked about it as if they were a couple of mates chatting in a pub. Jimmyâ€™s â€œItâ€™s a funny old gameâ€ became a national catchphrase thatâ€™s still heard used today.

Their style sat uncomfortably with some in the football establishment, but the public loved it. The Saint and Greavsie show pulled in audiences of 5 million on a Saturday lunchtime, more than many peaktime

I was working closely with Greavsie in the media world when Brommers made his decision to pair Jimmy and Ian. This followed some lively links between them when the Saint was anchoring On the Ball in London and Greavsie was working for Central TV in Birmingham.

Brommers, who used to report on Jimmy the footballer when writing for the Daily Herald and then Daily Mirror, told him: â€œI want you being like you were on the pitch, Jimbo. Cheeky, unconventional and expressing yourself freely.â€

Saint was given the straight man role, linking with a script on autocue while Jimmy ad-libbed. Anchorman would have been a role beyond Greavsie, because he is dyslexic and avoids reading in front of the camera, which helps explain his totally natural style.

I asked Brommers what had been the inspiration for pairing them. â€œIt was just one line from Greavsie,â€ he said. â€œI was watching a link from Birmingham in my London studio when Gary Newbon asked Jimmy how he would have reacted to a goal that we had just seen ruled offside. He said, â€˜I would have told the linesman where to stick his flag.â€™ That was it. I thought, â€˜This is what the viewers want to hear, not some convoluting explanation as to the ins and outs of the offside rule.â€™â€™

Compared with back then, ITVâ€™s football coverage is now flat and unimaginative. Perhaps it is they who should be looking to Saint and Greavsie to give them the kick of life.

Will it work for Setanta? They are banking more on the old double act than they dare admit. My contacts in the industry whisper that the subscription sports channel is struggling to stay in business.

Setanta are going free-to-air with the FA Cup final and the three packaged contributions from Saint and Greavsie, meaning the signal will be un-encrypted and available to cable and satellite viewers without a subscription.

They say nostalgia ainâ€™t what it used to be, but hereâ€™s one ancient viewer who will be dropping in to see if Saint and Greavsie can score like in the old days.

For those of you following my self-publishing adventure, the book â€” The Lane of Dreams â€” rolls off the presses next week. That sound you can hear is my knees knocking together. The author/publisher now becomes salesman, and if it flops I have nobody to kick but myself. 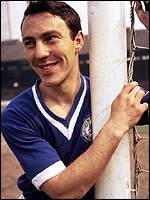 before going into the shops, and am working the Facebook and Twitter networks to drum up business.

This journey into the modern world is quite a challenge for an old hack who started out more than 50 years ago with a typewriter and carbon paper. Blimey, I was reporting football when Saint was Motherwellâ€™s centre forward and Greavsie was making his goal-scoring debut as a 17-year-old prodigy at White Hart Lane â€¦ putting the ball into the Tottenham net for Chelsea.