Harry Carpenter, one of sports broadcasting’s best-loved figures, has died. He was 84.

Carpenter died in hospital in south London on Saturday. He had been unwell since suffering a heart attack last summer. A family spokesman says that Carpenter’s funeral will be a family affair, followed by a public memorial service to be held in London. 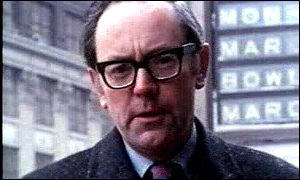 Carpenter’s career began as a sports reporter and sub-editor, for the Greyhound Express and on the Daily Mail, before joining the BBC, where he worked in the sports commentary team for nearly 50 years.

He served as a boxing columnist for the Sporting Record from 1950-1954. He joined the Daily Mail as a boxing writer and sports columnist from 1954-1962. In this time, Carpenter was also broadcasting for radio as well as television, covering thousands of professional and amateur fights, including all Olympic Games from 1956 until 1992.

He wrote three books on boxing, produced the documentary, The Richest Prize in Sport, and served as the voice of the Hall of Fame series, Sports Archive and Great Moments in Sport.

He joined the BBC in 1949 after seeing service in the Royal Navy. His first boxing commentary came that same year, but he did not leave Fleet Street to go full-time with the BBC until 1962. He then fulfilled many roles – as frontman for Grandstand and Sportsnight, as well as coverage of the Boat Race, Wimbledon and Open Golf – but was first and foremost known as the corporation’s boxing commentator through until his retirement in 1994.

In that time, Carpenter covered many of the biggest title fights of the 20th century. His background and training as a journalist also usually saw him call the fight round-by-round, but also step in to the ring after the main event for the immediate post-fight interviews. Carpenter developed a rapport with most of the big boxing names of the latter part of the century, not least Muhammad Ali, and of course, Frank Bruno, whose replies to the diminutive BBC man with the microphone gave him the catchphrase, “Know what I mean, ‘Arry?”

Carpenter was a regular Sports Personality of the Year co-host throughout the 1970s and 1980s, having first worked on the programme in 1958.

Among the tributes paid today, Des Lynam, his BBC colleague who followed in Carpenter’s footsteps, described him as “a consummate wordsmith”.

The SJA sends its deep condolences to Harry’s widow, son and family.

Harry Carpenter’s career in clips, by The Guardian: click here