Bill Frindall, the cricket-loving scorer whose in-depth knowledge of the game’s minutiae and his own personality saw him become an integral part of BBC Radio’s Test Match Special team, has died after a short illness. He was 69.

As well as his radio work, Frindall also wrote many cricket-related books and devised a 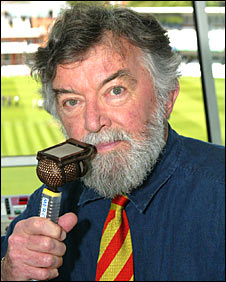 scoring system that became a worldwide success. His books included the Wisden Book of Test Cricket and The Guinness Book of Cricket – Facts and Feats, while from 1986 he edited the Playfair Cricket Annual – an indispensible pocket-sized stats book much used by journalists on the road for whom Wisden was just too weighty.

Frindall’s death came after he contracted Legionnaire’s disease. It prompted a series of fond tributes from his many friends and colleagues.

“He brought scoring alive,” BBC cricket correspondent Jonathan Agnew said. “This is what Bill will always be remembered for. The weird world of cricket scoring to many people is incredibly dull but Bill made it interesting, he made it lively.

“You could throw any question at Bill, any fact or figure and with great relish he would know it, he would find the answer.”

In many respects, Frindall was one of the last links to TMS‘s “glory years” when the commentary box included the likes of John Arlott, Fred Trueman and Brian Johnston, who dubbed the scorer the “Bearded Wonder”. Over the years, Frindall’s contributions to the coverage gradually increased from scribbled notes passed to the commentators, to spoken asides, eventually leading to his own section in the lunch breaks when listeners would quiz his encyclopaedic knowledge.

Born in Epsom in 1939, Frindall attended Reigate Grammar School and studied architecture at the Kingston School of Art, before serving in the RAF for six-and-a-half years.

Frindall took over the scoring for Test Match Special in June 1966, following the death of the previous scorer, Arthur Wrigley, who had been the BBC scorer from 1934 up to his death in October 1965.

Frindall modified the linear scoring system developed by Australian scorer Bill Ferguson into a version that is known as the Frindall System, which allows full recording of the scores while accumulating statistics in a ready-to-use format suited for live broadcasting.

Frindall was appointed an MBE in 2004 for his services to cricket and broadcasting.