Been there? Done that? Got the T-shirt? 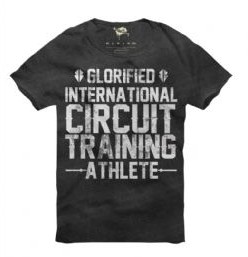 Adrian Warner, the BBC London sports news correspondent, certainly has after reporting from the Olympic Park last night about the venue disaster at the Copper Box which made it impossible for four prestigious netball international matches to be staged there, forcing England Netball to make refunds of more than £50,000 to thousands of disappointed spectators.

During his live two-way broadcast for BBC London from the arena, in explaining what had happened, Warner described the “Battle of London” fitness competition that had been staged at the Olympic venue over the weekend, with free weights being tossed about the arena causing a series of holes in the flooring, as “a glorified international circuit training” event.

The remark was soon doing the rounds on Twitter among disgruntled fans. And quick as a flash, one enterprising sportswear retailer has rushed out a T-shirt based on SJA member Warner’s comments, with “Glorified International Circuit Training Athlete” plastered across the chest. Available in S, M, L or XL, all for a bargain £17.

Warner, the former Reuters and Evening Standard sports reporter who is soon to leave BBC London as part of the latest round of redundancies at the station, may want to consider putting in a claim for intellectual property rights…