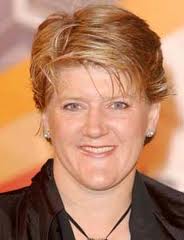 BBC sports presenter Clare Balding has created a Twitter storm over remarks made about her lesbianism in a TV review written by the Sunday Times‘s critic, AA Gill.

Balding, 39, who says that she does not make a habit of responding to critical reviews of her work, initially complained to the newspaper’s editor, John Witherow about the review of her new programme, Britain by Bike.

But, she said, she was then even more horrified by his response.

Gill had written: “Some time ago, I made a cheap and frankly unnecessary joke about Clare Balding looking like a big lesbian. And afterwards somebody tugged my sleeve to point out that she is a big lesbian.”

Gill continued: “Now back to the dyke on a bike, puffing up the nooks and crannies at the bottom end of the nation.”

According to the Guardian, Balding was further “appalled” when Witherow replied thus: “In my view some members of the gay community need to stop regarding themselves as having a special victim status and behave like any other sensible group that is accepted by society.

“Not having a privileged status means, of course, one must accept occasionally being the butt of jokes. A person’s sexuality should not give them a protected status.

“Jeremy Clarkson, perhaps the epitome of the heterosexual male, is constantly jeered at for his dress sense (lack of), adolescent mindset and hairstyle. He puts up with it as a presenter’s lot and in this context I hardly think that AA Gill’s remarks were particularly cruel, especially as he ended by so warmly endorsing you as a presenter.”

Balding has responded by firing off a complaint to the Press Complaints Commission, and by collecting a large following on Twitter, where she has sought advice and support after signing up earlier this week and describing Gill as a “twat”.

“When the day comes that people stop resigning from high office, being disowned by their families, getting beaten up and in some instances committing suicide because of their sexuality, you may have a point,” Balding told The Guardian.

“This is not about me putting up with having the piss taken out of me, something I have been quite able to withstand, it is about you legitimising name calling. ‘Dyke’ is not shouted out in school playgrounds (or as I’ve had it at an airport) as a compliment, believe me.

“I am happy to be described as a lesbian, as and when relevant, but ‘dyke’ is too often used as a pejorative and insulting term.”

Last year, Balding, who was briefly a member of the SJA committee, was the centre of a row of her own creation after making comments about jockey Liam Treadwell’s appearance as she interviewed him following the Grand National.

Read the Guardian‘s report in full by clicking here.