The BBC is to lose another of its leading sports broadcasters, with a report that Arlo White has taken a job working as an in-house presenter for the Seattle Sounders in America’s Major League Soccer.

White is a regular on Radio 5 Live, where he has been one of the set of Test Match Special presenters introduced 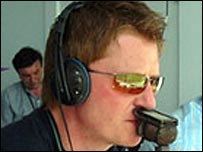 With the spectre of BBC Sport’s and Radio 5’s move to Salford looming large, in recent months, the BBC has lost several stalwarts of its sports broadcasting teams. James Munro, the BBC News sports reporter, has taken a job at Wimbledon, while his colleague Adam Parsons is now at the BOA.

Niall Sloane, BBC Sport’s head of football and motor racing, resigned last year to go to ITV. Even White received something of a promotion within BBC radio’s pecking order last year when Sony Award-winner Mark Saggers left the corporation to work at TalkSport.

White’s arrival at TMS coincided with fears for the broadcasting institution’s future status, amid complaints from former summarisers, such as The Guardian‘s Mike Selvey, about the “dumbing down” of the programme.

Selvey admitted to being disappointed at being dropped from the summariser roster by Mountford, saying, “Once upon a time TMS was part of a great tradition of BBC radio. But they are bringing in commentators with little knowledge of the game, especially of the cadences of Test match cricket.”

According to a report in today’s Daily Mail, the comments were seen as being targeted at White.

White began his broadcasting career covering non-league football for Radio Derby, and joined the BBC in 2001. He was Five Live Breakfast‘s sports reporter between 2002 and 2005. Since then, his duties have been broad-ranging, and even taken in commentating on the SuperBowl.

He commentated on England’s Ashes tour of Australia 2006-07, and in 2007 the Cricket World Cup, the West Indies and India tours of England, as well as the ICC World Twenty20 tournament.