As the summer sporting season moves from tennis in south-west London, northwards to golf and, before the seaside links of Royal Birkdale, this week to Loch Lomond, ROBERT PHILIP, now

with the Sunday Herald, interviews one of the giants of sports broadcasting, Peter Alliss

It could be springtime in Augusta with its Gone With The Wind clubhouse, a summer morning in St Andrews, where the 18th green is shrouded in a sea haar, or a glorious autumn day at Wentworth when the leaves of the great oaks are transformed into a Monet canvas of golds, yellows and russets, but surely there can be no finer accompaniment to a round of golf than the mellifluous tones of Peter Alliss?

he “Best Golf Commentator – EVER!” according to Golf Digest magazine – who else could have described Jean Van de Velde’s slapstick shenanigans at Carnoustie in 1999 as “more Jacques Tati than Jack Nicklaus…”? – his master’s voice will be coming to us from the bonnie, bonnie banks of Loch Lomond throughout this week’s Scottish Open. The shot-making and swings of Monty, Ernie and Phil Mick will be afforded expert analysis but it is safe to presume that the ducks and drakes, water-skiers and yachtsman, mountains and (hopefully) sunsets will offer many a rich aside.

“It’s a magnificent place to play and watch golf,” says Alliss who, despite his affection for all things Scottish, cannot resist a gentle swipe at our climate and insect life. “You only wish the good days came along more often. I love the west coast of Scotland but you just know the weather is closing in from across the sea in Northern Ireland before it hits Turnberry, turns north, then sweeps in over Loch Lomond. On top of that, you wage a running battle with your midges. No one tells you about the downside to Scotland in all those lovely, glossy tourist brochures. Joking apart, on a nice day when the broom’s out, the water’s still and the midges are gorging themselves elsewhere, it’s a truly magical part of the world.”

From Loch Lomond to Royal Birkdale where Alliss will lead the BBC team of commentators covering the 137th Open Championship, the tournament that will forever mean more to him than any other. How could you possibly fail to become captivated by the lore and lure of the Claret Jug when you can say: “Someone once asked me how many Open champions I’d met or had played golf with and it staggered me. I can remember being introduced to James Braid, who won the first of his five titles in 1901, and J H Taylor (1894, 1895, 1900 1909 and 1913). I caddied for my father against Bobby

Jones in 1945 when he was still in US Air Force uniform, and since then, of course, every modern champion since 1946.”

The son of Percy Alliss, a Ryder Cup player in 1933, 1935 and 1937, Peter (who remains improbably youthful at the age of 77) grew up listening to the tales of the great champions who would regularly gather around the kitchen table of the family’s club professional’s house at Beaconsfield in Buckinghamshire.

“I’d sit quietly to the side, utterly spellbound by the yarns of dad and his cronies. Alf Perry, Reg Whitcombe, Dick Burton, Alfred Padgham, each and every one a former Open champion. These were the golfing giants who’d drop in for a cup of my mother’s tea and to reminisce about past glories.”

And what wondrous stories to stoke a child’s imagination they were. Perry’s winning score of 283 in 1935 was not beaten at Muirfield until Jack Nicklaus won the first of his three titles on the links of The Honourable Company of Edinburgh Golfers 31 years later. An absent-minded Padgham, champion in 1936, left his clubs in the pro shop at Hoylake on the Friday night and had to embark upon a spot of breaking and entering to rescue them in time to start his final two rounds the following morning.

For his part, Whitcombe emerged triumphant from a fierce storm at Royal St George’s in 1938 when debris was scattered as far as the Prince’s Course almost a mile away in the village of Sandwich. Within weeks of his victory at St Andrews in 1939, Burton found himself in the RAF and, consequently, retained the trophy for seven years.

“And so in the spring of 1946, he wrote to the Royal and Ancient saying: Dear Sirs, Please find enclosed my fee of five guineas for this year’s Open. I will bring the trophy back when I come.’ Touching, isn’t it? Heroes all but to me they were just uncle Alf, uncle Reg or uncle Dick.

“It was all so very different seven decades ago. Come 2008, Tiger Woods is a global superstar, the most famous sportsman in the world like Muhammad Ali before him. But those champions of 70 years ago were all club pros and although it was quite nice for them to win the Open, their club members didn’t really care that much. They’d say something like, ‘Well done, Reggie. Bloody awful weather down at Sandwich, wasn’t it? Right then, when are you free to give my wife a lesson? Have you re-gripped my putter like I asked you? Did you remember to put those studs in my shoes before you went off last week. I need a new umbrella, have you anything nice in the shop?’ And this was the Open champion they were talking to.

“That’s why the final 36 holes of the Open were traditionally played on a Friday until relatively recently; so the new champion, whoever he was, could be back behind the counter of his pro shop on the Saturday morning when the members turned up for their weekly medal. I always smile when I hear people say Tiger must be the best ever. That’s because everyone on the planet knows who he is through television, newspapers and magazines.

“But if we go back to the St Andrews of 1860, we might come across a circle of local worthies sitting over a glass of ale in a tavern somewhere in town where the conversation would go something like this: ‘I see Old’ Tom Morris won the championship again.’

‘Aye, but have you seen his boy – Young’ Tom – play? He’ll be the greatest’.”And then out goes Young Tom to win the Open three times in a row. But unless you were actually there to see him do it, the chances are you would never have heard of Young Tom Morris. Oh, all right, perhaps the Glasgow Herald might have written about it, but if you didn’t happen to pick up that particular 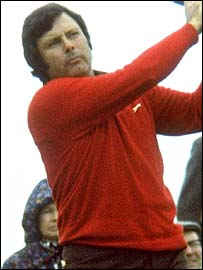 edition then you would have had no idea he even existed. That, to me, is one of the abiding fascinations of golf.”

Having made his Open debut at Hoylake in 1947, Alliss missed the next three championships while completing his National Service, making Royal Birkdale his 58th Open as competitor and commentator. “What do I remember of my first Open? Just about everything. My father’s playing partner for the first 36 holes was George Duncan, who’d been the champion at Deal in 1920, and they went round in two hours 10 minutes. Now it can take double that and frequently more. I shot 86, 84 or thereabouts which wasn’t bad for a 16-year-old laddie in the wind and rain.”

From those humble beginnings, Alliss would emerge as a major power in European golf, competing in eight successive Ryder Cup contests from 1953 to 1969 (the highlight of which was a victory over Arnold Palmer at Atlanta in 1963), while winning 21 tournaments, including three PGA Championships – second only to the Open in prestige at the time – and, memorably, the Italian, Spanish and Portuguese Opens in three heady weeks in 1958.

“I won by a margin of 10, 10 and six shots and collected a grand total of Â£1,154 in prize money. I not only shared a room with my pal Ken Bousfield on the tour but we also had an agreement to pool our winnings so after buying beers for the entire population of Lisbon after my third win on the trot, we had a little over 400 quid left each. Still, you could buy a very nice house indeed for two or three thousand back then, so it wasn’t a bad three weeks’ work.”

Like so many British players of the era, however, Alliss invariably left his best form on the practice ground whenever the Open hove into view, finishing in the top 10 on five occasions without being able to mount a sustained challenge. “I might – and I repeat might – have won at Royal Birkdale in 1954, the year of Peter Thomson’s first victory. I was only four behind Peter at the finish after frittering away umpteen shots along the way. Ah, well, that’s what they all say, isn’t it? But I was only 23 and thought that my time would come but, as happens, the years tick by and suddenly it had all gone past me.”

Alliss retired at the age of 39, golf’s loss to the accursed yips being television’s gain with his pithy quips becoming the stuff of broadcasting legend. Does Tiger’s absence from Royal Birkdale, I wonder, rob the greatest championship of them all of much of its lustre, or simply add intrigue to an always intriguing week by the seaside?

“Lee Westwood made a good point when he said, ‘Listen, they don’t engrave an asterisk beside the winner’s name on the trophy saying this championship was won without the participation of Tiger Woods who was injured’. It goes without saying that the Open won’t be the same without Tiger because he’s created his own aura over the past 12 years. But it could be more interesting without him and whoever emerges as the winner will be the Open champion – end of story.”

And, finally, let us return to the 18th at Carnoustie in 1999 when the hapless Van de Velde, needing only a double-bogey six for victory, compiled an accident-strewn seven before losing the resultant play-off to Paul Lawrie. “I wasn’t being flippant. I was most upset when some people accused me of taking the mickey. I described those scenes with a great sadness. I dislike using the word tragedy’ in a sporting context but that was one of the most poignant sporting tragedies I’ve ever seen.

“The whole drama took so long; the night was drawing in, the last trains to Edinburgh and Glasgow were waiting at the station, the spectators were impatient to be off home. When I saw poor old Van de Velde with the driver I thought, Oh, my God, he’s three shots in front, he could use his putter off the tee. No one had any idea where his drive was going as we followed it via the various bangs. But as luck would have it, there he was above ground.

“All he needed was a 6- or 7-iron down the fairway, a pitch on and three putts and the claret jug was his. Instead of which, we had this chapter of accidents. Suddenly he was in the burn and the tide was coming in. I don’t know what on earth possessed him – it was so easy I could have stepped down and got his six for him – and, poor bloke, he’s tried in vain to explain it over the years.

Aye, the young listener grew into the spinner of wondrous tales.

This article first appeared in the Sunday Herald, where Robert Philip writes a weekly interview