The past week in quotes, on sport and journalism, including 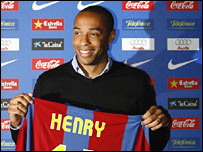 “Arsene has been an inspiration on my career. Unfortunately and understandably he has said that at this moment he will not commit to the club past the expiration of his current deal which finishes at the end of this coming season. I respect his decision and his honesty but I will be 31 at the end of next season and I cannot take the chance to be there without Arsene Wenger and David Dein” – Thierry Henry’s open letter, in The Sun, explains he reasons for moving from Arsenal to Barcelona

â€œThe doctor has advised me not to play and that I probably need about 10 days to be ready. Unfortunately, I donâ€™t think it is going to rain for the next 10 daysâ€ â€” Andy Murray

“We’d end up having to pay a lot of money for, say, the six best teams, and the other teams would have no money” – Rupert Murdoch arguing against individual negotiation over television rights by Premiership

“I congratulate Ricky Hatton. The shot you saw… I have been in boxing 42 years and only five times have I seen the liver shot thrown so well. Once you get hit that way, the guy don’t breathe for 30 seconds. It is better than one to the chin, it is the perfect shot” – Las Vegas promoter Bob Arum after Ricky Hatton’s short-order victory over JosÃ© Luis Castillo

“Watergate reporter” Carl Bernstein, promoting his new Hillary Clinton biography, on the state of modern journalism
“One of the things I’ve observed having been interviewed so many times is that reporters tend to be terrible listeners. They have usually decided what the story is before they do the interview, and they will choose the one which will manufacture the most controversy. But manufactured controversy is not news”

“I’m sure you weren’t doing anything that everyone else wasn’t doing. You’re just the unlucky one who got caught” – international cycling chief Pat McQuaid to 2006 Tour de France winner Floyd Landis, according to the cyclist’s new book

“Sven-Goran Eriksson is one of the names that my adviser told me about. He has a very good reputation and he is a very capable coach. I’ve met him once – probably last week. I am very new in the Premier League, so I’ll let the professionals decide. If they tell me this is the one they prefer … I normally follow their recommendation” – exiled former Thai prime minister Thaksin Shinawatra explains his hands-off approach to ownership of Manchester City

“The existing players are very good but we will have to bring in more good players… we need to add two strikers and two midfielders” – new Manchester City owner Shinawatra, apparently less hands-off

“Royal Ascot is, according to the BBC’s continuity announcer introducing Tuesday’s opening afternoon from the meeting, the place where fashion

and sport collide. And there can be no doubt about that in the case of Clare Balding’s outfit” – Jim White in the Daily Telegraph

“Clare shared carriage duties with an extremely posh, very camp man called James Sherwood, who sounded like the bastard love child of Dale Winton and Brian Sewell, and knew more about hats than could possibly be healthy” – Martin Kelner in his ever-readable sport-on-television column in The Guardian

“It was never Americanised … it might have been Australianised a bit, though” – Murdoch defends Sky Sports coverage style

Hunter Davies on his chief fear when recruited to write Wayne Rooney’s “autobiography”:
I’d never met Wayne, but I was asked if I’d like to come along to meet him. I was apparently on a shortlist of three writers, all of whom were being invited into The Presence. Waiting in the atrium at HarperCollins’ mega-impressive Hammersmith HQ, I suddenly wondered if a certain distinguished sports journalist might also be on the shortlist. I had been jolly rude to him, some weeks previously, and heard he’d vowed to duff me up.

“From a Scottish player’s point of view, the matches against England are absolutely tremendous for everyone concerned. It would be great knowing that at the end of a hard season you were going to pit your wits against players from what everybody says is supposed to be the best league in the world – but isn’t” – former Scotland football captain Archie Gemmell, clearly not bitter after a career spent playing in England, arguing for a resumption of the home internationals