Lots on the media rights dispute at the Rugby World Cup this week, some dismissive views of England’s opening performance, Sir Bobby Charlton’s fears for domestic football, Steve McClaren’s selection policy for the 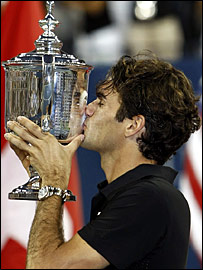 England team, Sir Alex Ferguson on the BBC, and the worst tea [sic] in the Premier League. Plus Roger Federer’s nerves

“I’ve had an upset stomach the last few days, I’ve been nervous, shaking, had cold hands before the match, I’ve had it all. I’m supposed to be the experienced guy who has got used to the situation but you never do get used to it” – Roger Federer, pictured, after his fourth US Open tennis title

“I pick the team and my selection will be dictated by what I think, not the players’ opinions” – Steve McClaren, after his England side beat Israel 3-0 at Wembley

“Jinxed Hargreaves ruled out of Moscow tie” – Times Online headline yesterday, ahead of tonight’s match against Russia. At Wembley

“The wind troubled me in some points and I hit a spectator down the bottom, lost my footing, then hit a tree, but somehow I didn’t fall off” – Britain’s new junior world champion (at downhill mountain biking) Ruaridh Cunningham describes his route to success

“It’s a coward’s time to leave, one year away from the Olympics” – Sharron Davies, 1980 Olympic silver medallist, on the early departure, for personal reasons, of Bill Sweetenham as British swimming’s performance director

“I remember asking Schumacher, during one of our altercations, if he ever thought he might be wrong and he coolly said: ‘Not to my recollection’.” – David Coulthard

“When we started playing one-day cricket if a team got 300 you thought- ‘What’s the point going out to bat?’. But it’s changed. We knew there was a genuine belief we could get this score” – India captain Rahul Dravid after his side’s remarkable victory at The Oval

“We are getting very close to the precipice now. The academy system, when it was first put together, assumed there would be a nice flow of youngsters from schools. That flow hasn’t happened” – Sir Bobby Charlton

Sir Alex Ferguson on the BBC:
“I think the BBC is the kind of company that never apologise and they never will apologise. They are arrogant beyond belief… They did a story about my son that was whole lot of nonsense. It all made-up stuff and ‘brown paper bags’ and all that kind of carry-on. It was a horrible attack on my son’s honour and he should never have been accused of that. But it is such a huge organisation that they will never apologise. They don’t even care if you sue them or whatever, because they are so huge and have insurance. They carry on regardless and it’s breathtaking”

“He’ll be like a father-figure to him” – Jamie Redknapp (who else?) on the relationship between father and son Peter and Casper Schmeichel

to the Press, ahead of the Rugby World Cup

â€œOur sponsors are 100% behind us. They care only about the TV audienceâ€¦ They donâ€™t care about newspaper coverageâ€ – Greg Thomas, the International Rugby Board’s answer to Henry Kissinger, attempts to defuse the row between the Press and the Rugby World Cup over Draconian accreditation requirements. The day after Thomas “dared” the Press to boycott the tournament, four of the world’s biggest news agencies plus the IRB’s own photographic agency, Getty, blacked coverage of pre-tournament events

Emily Bell, in The Guardian
“I suppose that it is possible that rugby fans could foil plans to make them watch matches on television by printing out the stream of stills from a website match report and stringing them together in a flicker-book to replicate the live action. Otherwise it is difficult to imagine how the proliferation of images would dent the value of television rights. In fact, quite the opposite. Anyone who has studied sports audiences will know that the core fans fetishise the coverage to the point where they will consume all they can from as many sources as possible”

“We have to wait to let it settle and recover, but it is not a long-term injury and while I am oath to be held to any sort of date, I am looking at the South Africa match as a game that I am hoping and determined to play in” – Jonny Wilkinson

“It was an instinctive reaction. There was no malice on my part” – Phil Vickery, the England captain, on the illegal challenge in his team’s opening World Cup game against the United States which led to him being cited for disciplinary action

“England were diabolical. They played like a team in reverse rather than a team desperate to retain their world title. They scored most of their points when the valiant Americans had a man in the sin-bin, they looked like a true Test rugby team only for a short period either side of half-time and in the first and the final quarters they were almost a rabble, bereft of flow and

rhythm, bereft of a strategy and even bereft of a common purpose” – Stephen Jones, in the Sunday Times

“Asafa Powell’s reputation as the big man for the small occasion was further enhanced yesterday when he lowered his 100 metres world record to 9.74 sec” – Tom Knight in the Telegraph questions further the courage of the world’s fastest man (pictured left)

Stephen Glover, in The Independent, on his dislike for The Times‘ ad campaign for its football supplement:
“A man is sitting on a lavatory with his trousers round his ankles. He is reading The Game. Suddenly he realises there isn’t any lavatory paper. He looks at his newspaper, obviously wondering whether to use it to wipe his bottom. But he decides against, evidently regarding it as too precious to be employed for such a task, and pulls up his trousers with a grimace, his bottom unwiped.

“This advertisement breaks what I had understood to be a cardinal rule. It makes you feel bad â€“ or it did me â€“ about the thing being advertised. Yuck! Even worse, from my point of view, is that this thing should be The Times, once venerable and still substantial. How on earth did this advert get through?”

“I know my team, I know the people here and I think we are being unfairly treated. We’ll do our talking on the track” – Lewis Hamilton, the F1 spying scandal still haunting his world title hopes, launches a bitter attack on Ferrari

“I can’t stand it when Lewis, or anyone else, is made out to be a godlike character. We all have our gifts and failings and so much depends on your car. If Lewis was driving for Red Bull I’m sure he would race extremely well, but he’d be battling for points” – Coulthard on Hamilton