What they said this week in sport and journalism, including David Beckham, Michael Schumacher, Martin Pipe, Nick Faldo and Leon Spinks 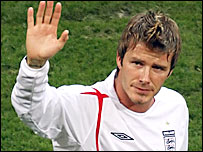 “I’ve said all I need to say on David Beckham. I am watching him along with a lot of other players, be it young, old or middle-aged as a footballer can be. He’s one of them but I would never draw a line under it” – Steve McClaren, England manager, on his fifth – or is it sixth? – choice right-side midfielder

“After tennis, I want to have a big house and wear a velvety robe” – Russia’s rising tennis star Dmitry Tursunov explaining that his hero is not Federer or Agassi, but Hugh Hefner of Playboy fame

“I love training, I love racing, but the things that come with it – the unwanted attention, all of these things that affect my family, the stories that go on – they get to you and it does affect you. I do start to question, is this actually worth it?” – five-time Olympic swimming champion Ian Thorpe, having moved to Hollywood and contemplating his future

“It is very nice of you to ask the question. It is maybe better to go while you are still asking the question rather than you hint it is time to go” – Michael Schumacher, after winning the China Grand Prix and being asked if he would reconsider retirement

“The whole team is gutted. Apart from the handful of people who don’t want me to take No1 to McLaren” – Renault’s Fernando Alonso after his defeat in Shanghai

The Football Agents’ Association’s board passed a resolution on September 27 urging members to open their bank accounts in this country and abroad to Quest in respect of our specific requests. There will continue to be a forensic investigation of agents’ bank accounts, voluntarily or through the FA. There will be a forensic investigation of entities both onshore and offshore and individuals identified to the inquiry as having received payments out of the transfer monies. There is a large amount of work to be done in relation to that yet

“On paper, the Telegraph‘s careful, cerebral schemes may well make sense. It’s just when you see them in action that nonsense gets in the way” – Peter Preston, in the Observer, on the staffing changes at the Telegaph

“He is not ready to play for 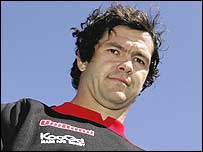 England now and he will not be anywhere near the required level by the start of the World Cup next year. He has looked a fish out of water in his two games for Saracens, which is hardly surprising, and his presence in the England squad does an injustice to club players in his position who have come through the academy system. It sends out the wrong message” – former England forward and RFU official Jeff Probyn on league convert Andy Farrell (pictured right)

â€œI like it. I like doinâ€™ what Iâ€™m doinâ€™. Iâ€™m still breathinâ€™, still makinâ€™ money and I have people round here who look out for meâ€ – former world heavyweight champion Leon Spinks, the man who in 1978 beat Muhammad Ali, on his present job, as a $5.15-an-hour janitor at the YMCA in Nebraska

“It has been 10 years, and my eye sight has not got any better” – Arsene Wenger when asked if he had seen a possible sending off or penalty involving his Arsenal players at Charlton on Saturday

“Water is a political commodity around here, especially as we’re so close to the Gobi Desert” – Sarah Winckless, Olympic rowing silver medallist, after visiting the still-waterless Shunyi Rowing and Canoeing Park, venue for the 2008 Beijing Games

I’ve had a wonderful life in racing – but it’s definitely put me off people. There was so much jealousy it became really hurtful. We were trying to keep our horses healthier and happier, and to have people say the opposite was quite shocking… The public never understood that we love our horses. We take their temperatures and wash their bottoms every day, we live with them as if they were our own children. And when they’re gone, we miss them terribly

“I can appreciate the sense that sports coverage no longer has the ‘Boys of Summer’ fairy-tale feeling, but that’s true of life in general and I suspect we’re better off for it” – Tom Jolly, sports editor of the New York Times answers readers’ questions