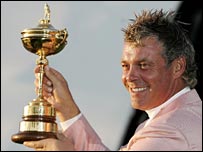 “It was the day sport got its priorities right…Though the wild scenes of jubilation around the magnificent 16th green amphitheatre made it feel as if Europe’s victory meant everything, it actually all paled into insignificance beside the sportsmanship which invested the K Club with such an unforgettable glow” – Ian Chadband writing in London’s Evening Standard.

“All golfers are familiar with the phrase ‘carrying your partner’, and after 18 holes of fourball play humping Woods around on his shoulders in the opening round, Furyk’s posture was already beginning to qualify him for the lead role in a remake of The Hunchback of Notre Dame. And we’re not talking about the American gridiron team” – Martin Johnson, in the Daily Telegraph, on the suspect Ryder Cup chemistry between the world’s top golfers, Tiger Woods and Jim Furyk

“Lee and Darren – golf’s Starsky and Hutch” – Mark James on Westwood and Clarke, pictured above, a partnership that worked at the K Club

Mark Reason in the Sunday Telegraph:

The modern Ryder Cup is steeped in money. If you want to watch a golf match where words like honour, tradition and ethos are still the main currency then go to next year’s Walker Cup at Royal County Down. If you want to watch golfers playing their hearts out while the moneylenders trash the temple then come to the K Club. I wouldn’t miss it for the world, but it’s nearly that expensive

“I don’t think you should have asked that question. You’re out of order” – Sam Allardyce to SJA Broadcaster of the Year, Jeff Stelling, who dared ask whether the Bolton manager had ever been offered a bung

Kevin Bond’s contract. There is no further comment” – terse, post-Panorama statement, issued to the London Stock Exchange on Tuesday

“I am extremely disappointed that Newcastle United Football Club has chosen to terminate my contract without carrying out any proper investigation into the allegations made against me in the Panorama programme” – Kevin Bond, pictured left, the first victim of the BBC television documentary into football’s “bung culture”

Some readers may have missed Campbell’s latest foray into print, in which he accused Panorama of creating frenzy without the necessary evidence, an ironic statement from the man who helped to make the case for war over Iraq’s weapons of mass destruction backed up by a dossier partly plagiarised – spelling errors and all – from an eight-month-old article published in the Middle East Review of International Affairs.

“The English game is considered the ‘dirty man of Europe’. We are the worst – and it shouldn’t be accepted. The corruption is in the transfer fees. Since the Premiership began, I would estimate that tens of millions of pounds have gone out of the game this way” – Colin Gordon, agent to England manager Steve McClaren

“He’s been named and shamed. He’s been vilified. He’s been whacked in the pocket, which none of them like. From the point of view of his personal credibility, it’s in the toilet” – Simon Jordan, the Crystal Palace chairman, on agent Jonathan Barnett following the FA’s nine-month ban and £100,000 fine over the Ashley Cole tapping up saga 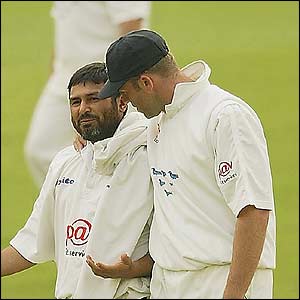 “I would like to thank Allah for giving us victory and for us winning the toss” – Sussex spinner Mushtaq Ahmed, having taken his 100th wicket of the season on he day that his side clinched the County Championship for the second time in four years

“I would like to thank Allah as well, because he has clearly played his part,” Chris Adams, the Sussex captain, pictured right, with Mushtaq

“Having a hairdo like that, it has to be perfect every day so I don’t think he likes anyone messing with it” – Bolton captain Kevin Nolan explaining that his team mate Ivan Campo regularly flies to Madrid to get his hair cut

“I told Henry that he must do his bit and I’ll do mine. If Henry were to win a scholarship, I would fund the remainder” – former world champion John Surtees on his 15-year-old son’s venture into motorsport

“But something kept Rusedski going. The farther into a corner he was pushed, the more defiant he became. The levels of tennis were of those he had not reached in months. For every Stakhovsky burst, he found something better. This was Rusedski at his belligerent best” – Neil Harman, of The Times, witnessing the possible Davis Cup swansong of Greg Rusedski for Britain against Ukraine

“I don’t know how much longer I’ll be playing cricket. I may very well like to play cricket for the rest of my life, but that’s not going to happen. I’m not going to say if I’ll play up to the World Cup, or after the World Cup. It all depends on one’s performance” – Pakistan captain Inzamam ul-Haq, interviewed ahead of this week’s ball tampering hearing in London

“The sooner he is out of that job the better. As far as we are concerned, he lacks complete credibility. He has his knife in the sport of cycling” – international cycling president Pat McQuaid airs his antipathy for Dick Pound, the head of the World Anti-Doping Agency

“I am telling you now, as a friend and in the clearest possible way: decide now to leave the IAAF Presidency… The alternative will be to have another five years of decadence and for you to pass to the history as the man who sunk athletics in the third millennium” – senior Italian sports official Luciano Barra does a “in the name of God go” in an open letter to the president of the world athletics governing body, Lamine Diack

“It would be unfair on records set cleanly, but I can’t put my hand on my heart and say which are clean.

The only way to restore credibility is to start again” – Geoff Wightman, chief executive of Scottish Athletics, calling for a clean slate on all athletics world records from 2008

“It’s easy to say sack the manager but when 11 players cross the line they should look in the mirror and for their own self-respect be satisfied they’re giving their all to the shirt, the club and the fans” – Leeds United chairman Ken Bates, pictured left, quoted in the Daily Star on September 20 – the day that Leeds sacked manager Kevin Blackwell.

Read previous sporting quotes of the week by clicking here.