The week’s sport and journalism news, in quotes. Including the retirement of swimmer Ian Thorpe, Neil Lennon on Celtic’s win over Man Utd, West Ham’s Icelandic takeover, the troubles at Hearts and an Olympic-sized row over the London 2012 budget

“It’s a decision that has been difficult. I realise that there’s things in my life that are more important for me” – Ian Thorpe, the five-time Olympic gold medal-winning swimmer who set 13 world records, announcing his retirement at the age of 24

“One of his brands, Thorpedo Foods, distributed by So Natural Foods, issued a statement to the stock exchange yesterday, seeking to allay stockmarket fears that a non-competing Thorpe could hurt the business” – Jacquelin Magnay, in the Sydney Morning Herald, on the broader implications of the retirement

“A remarkable athlete, a great swimmer, a good bloke and I wish him every

“I had a bad feeling in the pit of my stomach, but Gary Neville came over and said, ‘I think he will miss’.” – Celtic’s Neil Lennon, right, on the comment from the Manchester United captain moments before Louis Saha had his late penalty saved in the Champions’ League match, won 1-0 by the Glasgow club

“We have to make savings. Job losses are always regrettable, but they are necessary in order to keep the company in a healthy financial state, so that we can defend ourselves against hard times and merciless competition” – Phil Hill, Editor of the Daily Express, explaining the latest round of job cuts at the paper

“I suggest that anyone who’s brave enough to meet Ibrahima down a dark alley should have a piece of Kryptonite with them. He’s a big lad” – Reading coach Wally Downes, on reports that players Stephen Hunt and Imbrahima Sonko had received death threats

“I don’t think we’ve got a discipline problem. It’s the players who are thick who are causing the problems” – Sheffield United manager Neil Warnock after two of his players had a Balti House punch-up in Halifax, with goalkeeper Paddy Kenny having his eyebrow bitten off

Robert Philip on the possibility of “Sir David Beckham”:

If Beckham is deemed worthy of joining Sir Bobby Charlton and Sir Tom Finney in the hallowed ranks, then why were Bobby Moore, John Charles and Johnny Haynes allowed to pass away without being granted the knighthoods they so deserved?

“Believe me, I’ve seen some dire games in England. You give yourselves too many pats on the back, saying that you have the best league in the world” – Celtic manager Gordon Strachan

“I have to win to eat. It’s all I do. Like everyone else, I don’t back loads of winners. I just back a few more winners than losers. No one makes a good living out of betting in hundreds. You aren’t going to win big betting small” – professional gambler Harry Findlay

“In terms of the club’s location we are buying what we see, which is West Ham at Upton Park. But if there is an opportunity to discuss a long-term move to the Olympic Stadium I would explore that. I recognise there will also need to be an athletics legacy from the London 2012 Olympics” – Eggert Magnusson, the Icelander paying a high-end price of £85 million for West Ham United, perhaps with the prospect of getting a state-funded, new £100m stadium in six years’ time 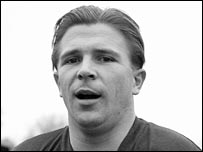 The biggest paradox of Puskas’s career is that, while his Hungary team ruled the football world in terms of quality, they failed to add the 1954 World Cup to the Olympic title they had won two years earlier… Germany won 3-2 after Hungary had taken an early 2-0 lead, Puskas having a last-minute equaliser disallowed for offside by the English referee, Bill Ling.

“Inwardly I wept at the result but my congratulations for Fritz Walter, West Germany’s captain, were sincere,” Puskas recalled. “The loser must have no spite.” Not a bad epitaph for the Galloping Major.

“You can’t get offended. I just have to laugh, take it with a pinch of salt. I don’t take things personally. The fans pay their money so I suppose they can say what they want… Being an accountant and a referee is the perfect excuse for having no friends” – assistant referee Amy Rayner, the subject of Luton Town’s Mike Newell’s outburst about women match officials, talking about the abuse she gets from the terraces

“It will be a good sign for us if they play Jones and Giles, because that tells me they are just trying to strengthen the batting in their tail, when actually they’re losing two of the finest arts in the game: keeping and spin bowling” – Australian spinner Shane Warne, pictured left, volunteering to pick England’s team ahead of the first Ashes Test at the Gabba. Was he being mischievous, or accurate?

One of the perks of living the pampered sporting journalists’ life is that you normally sit on the halfway line, are brought sandwiches and coffee on request, and allow geisha girls to rub you down whenever there’s an injury break.
It’s easy to forget what life is like as a real spectator. And at Twickenham last Saturday, there were times when it wasn’t much fun. And the main reason for that can be summed up in one word: beer.

“It’s flattering when the England boss asks you to go back, but basically I decided I didn’t need to go back” – Manchester United midfielder Paul Scholes on approaches from Steve McClaren to come out of international retirement

Tom English, writing on an affair of the Hearts, in Scotland on Sunday:

Friday was another contemptuous day in the life of Vladimir Romanov’s attitudes to the supporters of his club. Friday is the day us beleaguered characters who do this job for a living troop off to grounds around the country and find out a sliver of information about what’s going on in the game. Nobody much likes these occasions but at least the likes of Gordon Strachan and Paul Le Guen turn up. Duty calls and they answer it well enough. At Hearts different rules apply

“The original construction budget of Â£2.4 billion looks increasingly like a fag-packet calculation, with the Government conceding VAT will have to be added as well as a contingency fund that could be as much as 60% of the original budget” – Paul Kelso writing in the Guardian on budget concerns over the 2012 London Olympics

“I have never ruled out more money coming from the National Lottery” – Olympics Minister Tessa Jowell to MPs on Tuesday, where she admitted that the budget for the Olympic Park had risen to Â£3.3bn

“This is no time to get timid” – Lord Coe