A busy week of sport, through the quotes of those at the centre of the action. This week: Andy Robinson, Marcus Trescothick, Steve McClaren, Iain Dowie, Roy Keane and Sir Alex Ferguson, Zara Phillips and Evander Holyfield 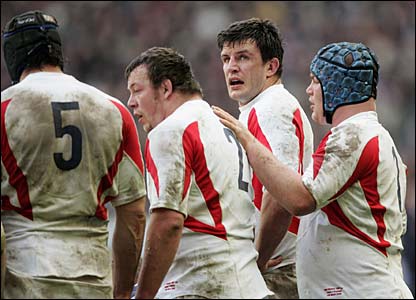 “To be booed off at Twickenham cuts right through us. I can’t remember feeling worse than this in rugby. It’s definitely the lowest point of my career” – England rugby captain Martin Corry (above, second from right) after the 18-25 defeat to Argentina

“It was an open and frank two-hour meeting where we all exchanged our views on England’s performance against Argentina and recent results” – England rugby supremo Rob Andrew. England made seven changes to the side for this Saturday’s match agaist South Africa

“I thought it was right Martin stayed as captain. To shoot him and say – Thank you Martin – would have been totally wrong” – coach Andy Robinson, who was not sacked and did not resign, and whose seven changes did not include Corry

Geoffrey Boycott in the Daily Telegraph:

Marcus Trescothick left the Ashes tour yesterday due to stress but if you think this is a one-off then think again. It is just the beginning – more players will crack up in the future. There is a quick and easy way of stopping this happening but it would involve the game’s administrators taking the one step that they dread – cutting back on the amount of international cricket

“We had a meeting about two days ago and it was thought that we should perhaps get Marcus’ wife and child out here. But I wasn’t too happy about that and was going to speak to Marcus about whether he would fly back and not let his wife come out here” – England cricket coach Duncan Fletcher on the departure of Trescothick (right) from the Ashes tour

“If you look at the league table, 12 games and eight points is a big factor in a decision like this, but I also have to say it is not just results. With Iainâ€™s full knowledge over the past two weeks we have conducted a review into every single aspect of what goes on in the football management side. We came to a conclusion that things would not improve on the pitch and therefore we had to take the decision we didâ€ – Peter Varney, Charlton’s chief executive, explains why Iain Dowie was the Premiership’s first managerial casualty of the season

“I think Charlton have not really given him a chance. Gutless, faceless people take those decisions, don’t they?” – Simon Jordan, chairman of Ian Dowie’s former club, Crystal Palace

“This is getting totally out of hand. I’m answering no more questions on Stewart Downing. Why are you trying to separate the players and myself or even the staff. That’s ridiculous” – Steve McClaren, the England football manager, refusing to answer questions raised by the content of the News of the World column written by his assistant, Terry Venables 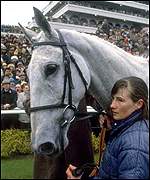 “I don’t believe Londoners should pay a penny more than 38p a week” – London Mayor Ken Livingstone at the London Assembly hearing on Wednesday, when the possibility of the 2012 London Olympics could cost more than Â£5 billion – or Â£1b over-budget

â€œHe was just an outstanding horse with an outstanding character â€“ basically all I had to do most of the time was just to sit on himâ€ â€” Colin Brown, Desert Orchidâ€™s regular jockey from 1983 to 1988, on the popular Gold Cup-winner, pictured left, who died earlier this week

â€œHe was without doubt the best horse I ever rodeâ€ – Richard Dunwoody, the three-time champion jump jockey

“For years, she was an absolute brat” – Capt Mark Phillips talking about his daughter, three-day event world champion Zara Phillips

“This is not park football, so what are women doing here? It is tokenism, for the politically correct idiots” – Luton Town manager Mike Newell rails about decisions that went against his side in a match in which Amy Rayner ran the line

Simon Barnes in The Times:

“Unthinking obedience to authority is not essential to sport and perhaps not to society either.

The questioning of authority doesn’t lead to anarchy, it leads to democracy. Is there any rule to say that sport should be let off the pain and mess of democracy?â€

“Managers and players have to take the responsibility. I’m on a high horse because I went out and kicked a few players, but I’m on about conning the ref. There are a lot out there trying to pull one over the referee by diving and then chasing him” – Roy Keane, pictured right

â€œWhatâ€™s going on in this world? Is he ever going to meet with Arsene Wenger or Rafa Benitez or this old guy here? Is preference being given to Chelsea because of a bad decision against them?â€ – Sir Alex Ferguson feeling left out because referees’ chief Keith Hackett organised a meeting with Chelsea

â€œThis is America and part of America 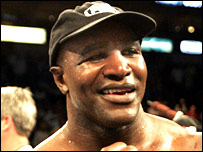 is letting people do what they want to do. I want to fight. I will become the undisputed champion, and then I will retire and be happyâ€ – Evander Holyfield ahead of his fight with Puerto Ricoâ€™s Fres Oquendo, in which, at 44 years old, he became world heavyweight champion for the fifth time (picture left)

â€œOn previous tours weâ€™ve started slowly and been beaten in warm-up games and bounced back quickly. Today was a one-day game and weâ€™re not going to get too despondentâ€ – England cricket captain Andrew Flintoff after his side’s first-match defeat

Peter Roebuck in his syndicated column:

Smashed around Canberra by rooky Australians, defeated in India, held by Sri Lanka, led by a novice, burdened with an erratic opening bowler, nursing an ailing opening batsman, constantly worrying about the talisman’s fitness, missing an admired captain, tolerating a butterfingered keeper, uncertain about which spinner to play, a fortnight from the first Test and carrying the hopes of a nation, England is in trouble