on his 20th anniversary as Manchester United manager, looks forward to the rest of this season:

I never like putting my head on the block with rash forecasts, because fate is a tricky customer, but I have to be honest and tell you there is a confidence about the place that suggests we are now in a position to pull out all the stops and go for it

“We’re eye to eye and I’m looking up and thinking to myself – If he does hit me, I know I’m dead” – Sir Alex looking back on how confrontation with Peter Schmeichal in the dressing room might have gone horribly wrong

“Matt Busby was always seen as the godfather of this club and you would never have thought there could be another Matt Busby but we have one, and he is the manager now. Alex Ferguson has surpassed Sir Matt’s achievements and in 20, 30 and 40 years’ time people will look back and see United as being formed by two great figures rather than one. He is Manchester United” – Gary Neville compares the incomparable Sir Matt, left, and Old Trafford’s present boss

“In 2006, the British media still uses institutionally racist stereotypes when dealing with black and mixed-race media figures. In the days of Alf Garnett at least we knew who the racists were” – Stan Collymore

“The media can bully, too – although the flip side to this is ridiculous adulation. Frank Skinner and David Baddiel almost bullied the former Forest player Jason Lee out of football with their sketches about pineapples. The songs and jokes caught on across the media and the guy’s confidence took a battering. He was on the transfer list within months” – former England goalkeeper David James writing another thought-provoking article in The Observer

“In this industry only a real luddite [sic] would argue that no one should have to start work before 10am, or work on Saturday, without extra payments. These are ridiculous demands” – Letter to Telegraph staff from the newspapers’ management in attempt to avert next week’s planned strikes

“If football wants to play within the confines of a track and field configuration,

are prepared to give track and field primary usage, and are coming to the table with Â£100m-plus to make this a viable option of course we would look at it” – Lord Sebastian Coe, chairman of the London Olympics Organising Committee, pictured right, speaking on Radio 5 Live and ruling out any chance of a football club moving into the Olympic Stadium as “anchor tenant” in 2013

“They said they would obviously not be interested on that basis” – Olympics Minister Tessa Jowell, in the Sunday Telegraph, on her discussion on West Ham moving to the Olympic Stadium

“We have looked again at the original funding package, and checked it against the realities of the site and the new regeneration plans for the Lea Valley that have been introduced since London won the Games. What we have said to government is look, you have a huge site with a fence round it and you have planning powers over the area, so it makes sense to do the regeneration work as a single package, and we suggested a budget to them to carry out a package of regeneration measures”

“Lord Coe… is widely tipped as a future head of the IAAF, athletics’ governing body, and is expected to stand in 2011. The post brings with it membership of the IOC and once in sport’s most rarefied club he would have every chance of one day assuming the presidency” – Paul Kelso writing in The Guardian

“We should seriously be thinking about giving the 2012 Olympic Games back, before it is too late. It’s all very well to say that it will be all right on the night, but that’s now looking increasingly unlikely. Tessa Jowell’s performance in the Commons on Monday confirmed that there already exists a state of mild chaos”

“I had hoped we could find a way for Darrell to continue umpiring at the top level. But the ICC executive board didn’t wish to appoint him in international matches” – Malcolm Speed, International Cricket Council chief executive, on the decision to drop Darrell Hair from the international umpires’ panel, following his controversial ball-tampering decision at the Oval Test in August

“We have no plans to update the edition. We’d only have to do it again if they win in the next round” – publishers of The Southend United Chronicles, following Tuesday night’s 1-0 League Cup victory over Manchester United

“Do you know, there is no hot water in the ladies’ loos here?” – Heather Rabbatts, football’s first woman chairman, at Millwall 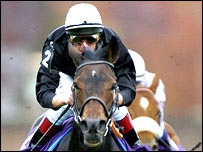 has not lost a match since August

“Not many horses win two Breeders’ Cups. She’s the best filly in the world without a doubt” – jockey Frankie Dettori, on Ouija Board (pictured), winner of the Breeders’ Cup Fillies and Mares title in 2006 and 2004, having placed second in 2005

“Great Britain halfback Sean Long was the bravest man on Aussie Stadium last night. He wasn’t entitled to get up after Willie Mason nearly decapitated him with a late hit in the 10th minute, but he not only got up – he got going in a big way for the Poms with a man-of-the-match performance” – The Sydney Morning Herald chokes back the tears to report Britain’s 23-12 victory over Australia, their first Down Under for 14 years

“In the world of amateur blogs all you have got is your accuracy, your trust and your brands and to think that cutting costs day after day is the way to improve any of those things is living in a cloud cuckoo land” – media commentator Ray Snoddy addressing the Society of Editors’ conference about how newspapers need to adapt in the digital world

“If the players had got their strength from good old-fashioned fitness work, they would still be playing” – former Pakistan captain and manager Intikhab Alam on the steroid bans for Shoaib Akhtar and Mohammad Asif

Former England captain Michael Atherton writing in the Sunday Telegraph on the bans for the Pakistan players:

Size on, Promax 50, T Bomb II, Viper, Nitron 5 and Blaze Xtreme. Video arcade games? The latest computer software programmes? Comic book heroes, even? Wrong, wrong and thrice wrong. Unless you happen to have been reading the Pakistan Cricket Board’s release regarding the sentences handed down to Shoaib Akhtar and Mohammad Asif following their tainted drug samples, there is a good chance you would be kept guessing for a long time. They are, in fact, just some of the supplements taken by Shoaib in an attempt to keep his injury-ravaged body on the park, and, one suspects, to complement his testosterone-fuelled lifestyle. I know it’s five years since I stopped playing, but what happened to a bit of running, a few weights and the odd sit-up here and there?