Tense and gripping finales in F1 and

â€œIt is just disappointing to get so far and so close and not be able to pick up the trophy. It is a stab in the heart” – Phil Vickery, England captain

“It’s been a crazy year and I honestly can’t say I’m really gutted. I finished second in the world championship. I beat my team mate under extremely difficult circumstances. I beat the two-time world champion. That was the goal” – F1 world championship runner-up Lewis Hamilton demonstrates that his rivalry with Fernando Alonso was clearly his priority

“I knew I’d scored it from the moment I squeezed over in the corner, and nothing I saw on the video replays while the television match official was making his adverse decision caused me to change my mind” – England wing Mark Cueto

“I am still very young and have plenty more years in me to achieve my dream of becoming world champion. We wanted to win the rugby World Cup and the world championship, but maybe it’s not England’s turn this year” – Hamilton

“We gave it everything. It’s so disappointing, immensely disappointing. We’ve come so far. To come so close and

not do it is heartbreaking” – England forward Martin Corry

Kevin Mitchell, The Observer
“For weeks, England’s obdurate, unfashionable old troupers had defied logic. At the final reckoning, striving against the rugby gods once more, they were forced to accept the reality of their shortcomings, although again not a soul present or watching from afar could fault their commitment. South Africa were marginally the more efficient of two stubborn teams in an old-style, tryless grind and deserved their win. And in one area, the line-out, they got the better of jumpers who had done so well all tournament. There could be no arguments. And there were not” 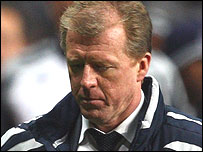 McClaren, pictured, ahead of England’s showdown in Moscow

“It is an absolute disgrace. We were comfortable, and they were running out of ideas. If that penalty had not been awarded, I am absolutely confident we would have won the game. We were in total control” – McClaren blames referee Cantalejo for Englandâ€™s 2-1 European championship defeat in Russia

“Let’s keep the crisis in perspective. Steve’s job is to make sure he gets his players ready for the Croatia game and the Austria friendly before it. He has our support, of course” – FA chief executive Brian Barwick gives McClaren a vote of confidence

“The players are absolutely gutted, but a draw would have had the same effect because we would still have had to beat the Italians to get through” – Scotland manager Alex McLeish continues to look on the bright side after his sideâ€™s shock defeat against Ukraine

“We are in a five-star hotel, and if the waves make a noise outside the window, the nice people will move you to a room on the other side. We have our own chef, physios, kit-men, masseurs, and I think some of them take it all for granted,” Wales boss John Toshack rails against today’s pampered footballers

From Guardian‘s Media Diary
“Thank god for the 30-second time delay.” John Inverdale on Radio Five Live after a Kiwi rugby fan in Paris, when asked who would win the World Cup, replied: “I couldn’t fucking stand it if the Poms won again.”
Although unfortunately for Inverdale, there was no 30-second time delay.

“Kuyt jumps in with a two-footed challenge, and then he goes on and scores the winning penalty. I feel we’ve had a raw deal and I don’t know where to start” – Everton boss David Moyes expresses his anger at the referee after his side’s loss to Liverpool

“In the week of an England international and a Rugby World Cup final, you could be excused for thinking it’s a good time to bury bad news, as a certain press secretary once said” – League Managers’ Association chairman Howard Wilkinson expressing his disquiet in Bolton’s handling of their dismissal of Sammy Lee