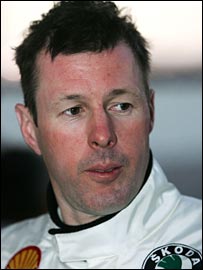 The tragic death of rallying’s former world champion Colin McRae overshadows the week, in which motorsport dealt with its greatest scandal by handing out a Â£50m fine to Lewis Hamilton’s McLaren team. Elsewhere, what was said about English rugby, Scottish football, Greg Dyke and Will Lewis, Gabby Logan, and Trinidad’s Jack Warner and the latest Fifa scandal

“As a driver Colin was misunderstood slightly as being reckless but everything you saw with him came from pure raw talent as opposed to being learnt. He was the Michael Schumacher of rally driving” – Jeremy Hart on Colin McRae

“Today’s evidence given to the FIA by our drivers, engineers and staff clearly demonstrated that we did not use the leaked information to gain a competitive advantage” – McLaren F1 boss Ron Dennis, his team $100 million poorer after their fine

David Hands in The Times on England 0, South Africa 36
“Never in the history of the World Cup â€” of which, of course, they are still the holders â€” have England been humiliated to the degree that they were by South Africa at the Stade de France here last night. Not a point, not a shot at goal, nothing save the final destruction of an honest but limited team whose time has now run out”

“We gifted them 20 points. They didn’t really have to work particularly hard and after that we were playing catch-up rugby. You can’t afford to give sides a head start in international rugby” – England captain Martin Corry on his side’s performance against South Africa

“Twelve months out of the game have done Andy Farrell no favours. He’s getting to grips with it but it’s probably just a bit too late at his age to be where he wants to be. We use him as best we can. He is a great leader in terms of his talk and presence but it’s not as simple as saying we are not using Faz as best we can. We have to look at the bigger picture. As it stands, it has not worked out for us as a team” – England rugby defence coach Mike Ford admits defeat

over the RFU’s big-money import from rugby league

“This is a sporting and financial scandal which the major football authorities are ignoring. Jack Warner, a Fifa vice-president and president of CONCACAF, is involved up to his neck yet nothing is done about it. He has shown by banning the players that he cares nothing about Caribbean football and their golden generation, only his own financial wellbeing. Now he will have to explain the huge gap” – London lawyer Michael Townley, who acts for the 16 Trinidadian footballers banned by Warner for daring to question why they did not get to share in their bosses’ Â£16 million profit from last year’s World Cup. Fifa’s ethics commission is powerless to act (again)

“Would you like a ticket for tomorrow’s game as well?” Rugby World Cup media ticketing official at the Millennium Stadium ahead of Wales v Australia last Saturday, proving that for some games (Fiji v Canada, in this instance) you could not even give away press seats

“If Heskey was in a Cluedo set, heâ€™d be the lead piping” – Simon Barnes, The Times

“I’ve been playing with my country for nearly 10 years now and hopefully there are a few more to come, but to get to 40 goals is a great milestone” – Michael Owen after his two goals helped England to a 3-0 win over Russia

“We’ve already identified the low hanging fruit will be $100m in savings” – Rupert Murdoch looking for cuts, barely one month after his acquisition of the Wall Street Journal

“It’s obviously unacceptable. I’m England captain and going to these places isn’t the thing to do” – England cricket captain Paul Collingwood after being caught in a Cape Town strip bar the night before the Twenty20 match against South Africa. Fredalos anyone?

“He is the man charged with bringing the Telegraph into the 21st century, which is a bit tough because it missed out on the 20th century altogether” – Greg Dyke introducing Telegraph uber-editor Will Lewis at the RTS Conference in Cambridge

SJA President Michael Parkinson
“We did a 70- to 80-minute show with Duke Ellington which the BBC put out in its entirety. Can you see that happening now? They’d say ‘Duke who?’ Not just the BBC but ITV, any of them. ‘Duke who? Can you get David Beckham on with him? Charlotte Church singing maybe?’ Ah, the decline of British television.”

“For someone who is always complaining about people doing unfair manoeuvres and someone who I look up to, he has gone and swiped me” – Lewis Hamilton, at the end of a bad week, following his fourth place in the Belgian Grand Prix

“Freakin’ chokin’ dogs” – what a former US Solheim Cup stalwart, Dottie Pepper, called the American team “inadvertently” on-air during this year’s event in Sweden. The US team went out on Sunday and beat Europe 16-12

“Lots of people will view this as my retirement… however, sailing is one of the few sports that reward’s age and experience” – double Olympic gold medallist Shirley Robertson, omitted from Britain’s team for the Beijing Games to make way for a Yngling crew comprising her 2004 champion crew

“Gabby Logan, who seems to have used the close season to spend more time with her hair straighteners (sorry, but I would say the same if it were Gary Lineker) may, however, be overdoing it. Before both the Japan and the Germany games she said: ‘Let us meet the 11 players with the nation’s hopes on their shoulders,’ which seemed to be slightly overselling the importance of the tournament in the national psyche” – Martin Kelner reviews the women’s World Cup TV coverage in The Guardian

“I would certainly be in favour of doing that. As far as I’m concerned, it is a zero-tolerance policy” – Pat McQuaid, the president of the International Cycling Union, calling for a life-time ban for drugs cheats

Frankie Dettori, talking in The Guardian
“For the last 15 Derbies I’d ridden I was tryin’ to make myself believe I had the right ‘orse, but this one was black and white for the public to see that I had the best ‘orse and it’s up to me to fuck it up, really. Of course I was nervous. And now I can, one day, not yet, say I achieved everything of my sport, I conquered my sport. To ‘ave that off your shoulders is great. Now I can enjoy the next 10 years. Enjoy it. Really enjoy it!”