From this week’s choice quotes: David Beckham, Ferrari and McLaren’s spy intrigue, runners without a leg to stand on, the Culture Minister’s ever-changing Olympic moods, and how Phil Mickelson learned that it isn’t over until it is over

â€œUntil my first game starts, Iâ€™m sure it will be going through peopleâ€™s minds that 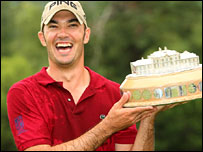 Iâ€™m just here for the red-carpet side. But for me, itâ€™s always been about the soccerâ€ â€” David Beckham, showing he has already learned to speak American

â€œIf the owner here is game, I certainly don’t have a problem with it!â€ â€” Phil Mickelson‘s response to reports that one bookmaker had suggested his victory in the Scottish Open was so certain after three rounds that he should be handed the Â£500,000 first prize ahead of Sunday’s fourth round. Mickelson, of course, lost in a play-off to Gregory Havret, the world No320 (pictured)

“Enjoyment in a Major? You enjoy a Major afterwards. From Thursday to Sunday it’s hard work” – Ernie Els ahead of this week’s Open Championship

“Their conduct by taking these documents, knowing they were not entitled to them, keeping them and copying them – on any view, they behaved disgracefully” – Ferrari F1 team’s lawyer on opening day of court action against rivals McLaren

â€œWhilst McLaren wishes to co-operate with the investigation, we wish to make it clear that the confidential information was only in the possession of one currently suspended employee and no element of it has been used in relation to our Formula One cars.â€ â€” McLaren

“Manchester United’s spending is something that we don’t control, we don’t want to control – we don’t comment,

we don’t want to comment. But when we spent some millions, everybody pointed at us as the team with more responsibility to win. That’s not the case this season” – Chelsea manager Jose Mourinho extols the benefits of new-found thrift. The Charity Shield is on August 5

â€œSince Iâ€™ve been in the team, I canâ€™t remember us making such a major statement of intent in the transfer market as thisâ€ â€” Steven Gerrard voices his support for Liverpool’s new American owners

Michael Johnson, world record-holder at 200 and 400m, takes a moral stance
“Anyone who will cheat will most likely lie as well. Anyone stupid enough to jeopardise an already successful athletic career and reputation and risk embarrassing themselves and their families – not to mention endangering their health – certainly cannot be the most credible person to comment on drug use in sport”

“The legs are not bionic” – Oscar Pistorius, “the fastest man on no legs”, defends his right to compete in open competition

“We believe these are technical aids. We are giving him the benefit of the doubt by doing research on his blades” – IAAF spokesman Nick Davies

“The benefits that the Commonwealth Games brought to Manchester and the power of that event to change people’s lives… I was wrong and I accept that now â€” I have changed my mind” – James Purnell, the new Culture Minister, explains his change of position over the costs of the Olympics, which he criticised nine months after the Manchester Commonwealth Games

“We cannot allow the ownership of and responsibility for professional football to be left in the hands of those who seek to exploit it financially or for some personal kudos at the expense of supporters. There is a clear need to address important issues such as ticket pricing, club ownership, plc status and merchandising policies. Clubs have every right to make a healthy profit, but not at the expense of fans” – Gerry Sutcliffe MP, loyal supporter of Manchester United and Bradford City, speaking in 1999, introducing a bill for a government regulator of football

“While many of the issues I raised then are still relevant now, things have changed a great deal. I now firmly believe the solution lies with sport regulating itself. Not only do we now have a powerful voice for fans in Supporters Direct, but Lord Burns’ reforms are set to come in at the FA soon, creating a footballing body capable of regulating the game properly” – Gerry Sutcliffe MP, Minister for Sport, speaking in July 2007

John Inverdale, in the Telegraph, on mistaken identities
“Leaving Twickenham after the Genesis concert on Sunday evening, a friend was so amazed to see who he thought was Phil Collins ambling ahead of him towards the railway station that he approached him for an autograph, only to find it was former hooker and columnist of this parish, Brian Moore”