“We’ve stayed together as a group 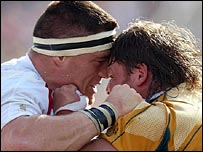 and we came here ready and prepared for a tough battle. We set our intentions out from the start by strangling the Australians. I though the defence, especially, was magnificent” – England forward Lawrence Dallaglio

“It is with a great amount of shame that I stand before you and tell you that I have betrayed your trust. You have the right to be angry with me. I have let my country down and I have let myself down” – Marion Jones tells a partial truth, leaving her sport to work out how to re-align the history of her decade’s dominance of women’s sprinting

â€œIt’s very unfortunate that the second place finisher is a convicted drug cheatâ€ – Nick Davies, spokesman for athletics’ world governing body, on the dilemma of stripping Jones of her gold medal to give it to Greece’s Katerina Thanou

medalâ€ – Lord Coe, a vice president of the IAAF and member of the IOC, as well as chairman of the London 2012 organising committee

Victor Conte, the man behind the Balco lab that developed dope test-beating designer steroids, sees no point in stripping Jones of her medals
“I don’t believe she should have her medals taken away, and the reason I say that is the anti-doping procedures and policies in place are basically inept. They are very easy to beat and there are many Olympic records and world records and Olympic gold medals that have been won that, in my opinion, were clearly won by athletes who were using performance-enhancing substances.”

“I’m actually excited. It will be the greatest day of my life. When I think how far I’ve come these 36 years I feel extraordinarily honoured” – Ian Botham, interviewed ahead of his appointment at Buckingham Palace today to be knighted by the Queen

“It’s unfortunate. But there is still one more race to go – I can still do it. When I got out of the car I was just gutted because I hadn’t made a mistake all year, and to do it coming into the pits…well, it’s not something I normally do” – Lewis Hamilton after his Shanghai exit

“We just dug deep and believed in ourselves. Maybe only 30 people in the world believed we would do it, but we stuck together and came out with a great win” – Jason Robinson

“All our flights plans were in place to return after the tournament finished. We had planned to stick around until the final” – Australian team spokesman explains hurried arrangements following his side’s quarter-final exit

“It’s unfortunate that the teams with the best two back lines were knocked out on Saturday. Those comments have been absolutely exaggerated beyond all belief” – John O’Neill, the Australian rugby chief who had said “We all hate England”. Which bit of that is exaggerated, John?

“I actually thought it was over. The wind was very skewy. When I set it up, it was blowing to my right. When I went back to redress the ball, it was going from right to left” Wallabies captain and goal-kicker Stirling Mortlock, whose missed last-gasp penalty cost his side the match against England, demonstrates that Australians do a good line in excuses in defeat, too

“I think this England side, since the South African match, have been very honest with each other. Not everyone was on the same wavelength. We came out of that and have played better now. We want to build on this. We’ll celebrate this victory and the fact that we’re playing again” – Jonny Wilkinson

“As the All Blacks fans left Millennium Stadium in Cardiff after their fifth successive failed World Cup campaign, a Scottish spectator called out: ‘Belts and shoelaces, please’.” – Greg Crowden, writing in the Sydney Morning Herald

John Inverdale’s Daily Telegraph column
“For the fifth World Cup in a row, the team who couldn’t lose have lost; the nation to whom it matters most has to reconsider its position of pre-eminence and, more than anything, it has to stretch every last sinew to ensure that in four years’ time it not only wins the trophy for its own domestic sanity, but puts on a show like no other for global consumption”

“The feeling in the shed is like no man’s land. There’s a sort of desolate decay and the smell of death” – former All Black Anton Oliver after New Zealand’s defeat to France. The best rugby team in the world has not won the World Cup since 1987

“We had all the subs on with 15 minutes to go, which is pretty unusual. We did throw the kitchen sink at it. To be fair, the Argentines were always going to tire because of the energy they had put into the breakdown, and we very nearly capitalised on that” – Scotland coach Frank Hadden after his side’s exit in the quarter-final to Argentina

“I will be supporting England. The win against Australia was one of the great victories in rugby. I think we can be confident that England is going to do well against France as well” – Prime Minister Gordon Brown

Martin Kelner’s sport on television column lavishes praise on ITV
“…a triumphant World Cup for ITV. Borrowing Miles Harrison and Stuart Barnes from Sky was a masterstroke. These chaps have the flying hours you need for a commentary-box partnership to work… the punditry has been spot on. Martin Johnson and Will Greenwood, despite often being dangerously close to cheerleading for England, are not shy of taking a realistic view of what is going on in a game and criticising former colleagues where justified. The biggest struggle for ITV was finding some highlights of England’s thrilling but not particularly expansive victory to show post-match but, as Johnson usefully pointed out, this was the kind of match you might expect at this stage of a World Cup, confirmed by the evening game between France and New Zealand.”

turns up in Court 12 at the Old Bailey today with, one imagines, an extra bounce in his step, for the ‘official’ start of his trial on charges of ‘conspiracy to defraud’ do you suppose Mr Justice Forbes will begin by congratulating him for winning the Prix de L’Arc de Triomphe?” – Marcus Armytage in the Daily Telegraph

Figure of the week: Â£40.6 million, the amount Richard Desmond was paid last year by Northern & Shell, the company that runs the Express group

“This was my best performance and it will take me to the next step up. I was up against a good guy and I proved to a lot of people that I could come back from my last fight and be stronger” – Amir Khan, pictured left, after defending his Commonwealth title by stopping Scott Lawton in the fourth round

â€œWe need something to happen now for basketball to establish itself as a proper professional sport in Britain – not just for the men, but for women, tooâ€ – Andrea Congreaves in interview after her retirement from international basketball

â€œItâ€™s really going to be business as usual in the short to medium term, in that the paper does an excellent job and many people rely on it either for their hobby or their job. Weâ€™ll seek to build on what is already there, and over time I hope that weâ€™ll expand the online offeringâ€ – Alan Byrne after supervising the Â£170m buy-out of the Racing Post

Nasser Hussain, in the Daily Mail
“As a member of the group put together under Ken Schofield’s chairmanship to look into English cricket, I feel a sense of huge disappointment at the appointments of Hugh Morris and Mike Gatting as the ECB’s new managing directors. It smacks of jobs for the boys, of the ECB being desperate not to rock the boat nor bring in anyone who might question how they do things.”

“I believe that there are lots of players in the game these days who do not love football. You’re going to say: ‘That’s amazing’, but it’s true. There are people playing football and it’s not that important to them” – Roy Keane on the cynicism of modern football