Sir Alex Ferguson’s silver jubilee, cricket spot-fixing and golf’s turn to reel from a racism row, this week’s sporting quotes with JANINE SELF 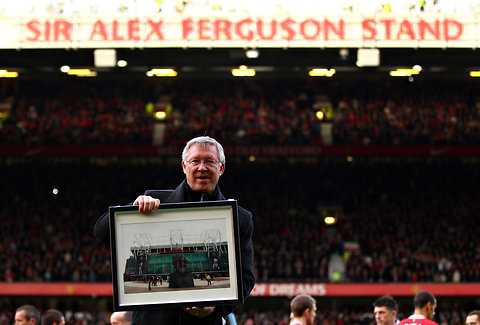 “I didn’t expect it and I didn’t know a thing about it. It made me feel really emotional and honoured to see my name on the stand. I think Mike Phelan knew what was going to happen, so he is sacked. It is a bit of a fairy tale to last so long. It has been a fantastic spell for me. It is something you don’t think is going to happen and I appreciate that. I will continue as long as I feel healthy enough to do it” Sir Alex Ferguson on his silver anniversary as Manchester United manager and having a stand named after him at Old Trafford.

“This has never been done before in the 133-year history of the club. Alex’s contribution to United has been immense and the magnificent stadium we have here at Old Trafford is a testament to his ability and success” David Gill, chief executive of Manchester United.

“I don’t think he will make another decision again about when he goes. He’s done it once, it didn’t work, and I don’t think he’ll do it again. He’ll go on and on and on. Absolutely. You’ll have to put up with him for a while yet” Sir Bobby Charlton.

“For me, the most remarkable thing about his record is not the number of great teams he has built, but the number of great teams he has destroyed. Time and again he has got rid of key players and it looked as if he had lost it completely. Every time he has been right. It is the willingness — this courage — to destroy that is at the heart of his greatness” Simon Barnes, The Times.

“It’s all about players, at the end of the day” Steve McClaren, a former Manchester United No2, offers his insight on Sir Alex Ferguson’s 25-year success.

“My aim was to shove it right up that black arsehole” Steve Williams, former caddie to Tiger Woods, sparks a race storm in golf.

“Never have you been in a room and seen so many jaws drop at the same time. We knew he was an idiot, but not a racist idiot. I was standing next to a European Tour official who said, ‘Thank God he is not on our Tour'” another caddie at the dinner in Shanghai.

“I think everything in that room last night was all in good spirits and a bit of fun. I think it probably got taken out of that room in the wrong context” Adam Scott, Williams’s current employer.

“When Steve Williams was caddie to Tiger Woods, golf writers would privately refer to him as an arrogant bully. The kindest description I ever heard was ‘thick’. Following his remarks at a dinner in Shanghai, we now learn that he is also a vicious bigot. We might have expected his current employer, the Australian Adam Scott, to fire the fool on the spot. Instead, he feebly regretted that the words had been reported. Soccer is not without blemish where race is concerned but it need take no lessons from golf” Patrick Collins, Mail on Sunday.

“We consider the remarks of Steve Williams entirely unacceptable in whatever context. We are aware that he has apologised fully and we trust we will not hear such remarks again. Based on this, we consider the matter closed” Tim Finchem and George O’Grady, heads of the US and European Tours, in a joint statement.

“The judge wondered whether this was the tip of the iceberg or not. I wonder whether it is the air hovering above the tip. Why on earth is there scope for them to return to the game within five years? They have brought shame to cricket and they should never be allowed to enjoy the fruits of this great game the rest of the non-cheating cricketers get to enjoy. If the ICC are serious about ridding the game of fixing and corruption they need to get tough and a life ban for convicted fixers should be the minimum” Sir Ian Botham in his Mirror column.

“It remains easy for a drug-fuelled 100 metres sprinter to render himself a millionaire through fraud. After a brief suspension, the contrition industry puts an arm round him and fixes him up with a book deal. There is no prison cell for him next to Mohammad Asif, Mohammad Amir or Salman Butt. Marion Jones, the most famous of all recent jailbirds, went down for lying to federal agents rather than doping her way to glory in Sydney. This time the police acted because a newspaper sting forced them to, while the impotence of the International Cricket Council’s anti-corruption and security unit was advertised across the game. If the police think governing bodies will stamp out illegality, it was an excellent week for criminality” Paul Hayward of The Observer

“It will give those who sneer at my profession a chance to apologise, for even if hacking was part of the investigation here – and its parent company deny it – there is a justification. I have lost count of the number of times I have heard players, administrators, umpires – the whole shooting match, in fact, including men of my own trade – roll the phrase ‘Sunday tabloid’ round their tongues, relishing the effect on their audience. I doubt if they are drinking a toast to the paper that delights in its nickname The Screws but they should be for it achieved an end beyond cricket’s administrators” Ted Corbett, veteran cricket writer, on his own blog.

“Peter was especially proud after discovering former England International cricketer Mike Atherton watched his debut performance from the press bench” Matthew Knowles, assistant editor of the Croydon Guardian, praises his reporter Peter Truman, who got the judge in the cricket spot-fixing trial to lift reporting restrictions in time for his weekly deadline.

“I was not the guy who sat down in The Ivy with Hansen and his agent to negotiate this figure, but if I had been I might have pointed out that if the charismatic Scot were to move to Sky, say, it is less likely Morrisons would come calling – the canny grocer likes to hire people from family-friendly BBC programmes, the One Show‘s Chris Evans being the latest – so why don’t we just knock a nought or two off, and does anyone want a dessert?” Martin Kelner on the revelation that Match of the Day pundit Alan Hansen gets paid £40,000 per programme from the BBC.

“Everything depends on Carlos. If he apologises to the squad and to me then everything will be as before. If he doesn’t, then Tevez has a value that everyone knows and something will happen in January. He is totally unprepared and being badly advised. I don’t want it to be like this and I would be the first to forgive him. When I was a player and did something wrong, I always apologised. Yes, every time. I told Carlos 20 days ago to apologise” Roberto Mancini, Manchester City manager, opens the door to Carlos Tevez.

“We might have to go into the loan market and do something. I still have faith in Paul, but goalkeepers can’t make too many mistakes. There was not a lot I could say to him at half-time, but I had to take him off for the good of the team, himself and the club. He was frustrated and despondent and it will take a lot to pick him up” Simon Grayson, the Leeds manager, after he subbed keeper Paul Rachubka at half-time during the 5-0 home defeat to Blackpool.

“Having the chance to win a gold medal doesn’t come around very often. Players, if given the opportunity, should go ahead and do it” Aaron Ramsey, the Wales skipper and Arsenal midfielder, makes it clear he wants to play for Great Britain at London 2012.

“Our advice to customers has been to avoid London if you possibly can, because it’s going to cost a lot of money” British travel agent driving away the tourists during London 2012.