Birthday wishes to Muhammad Ali, Mark Hughes back in management, Leveson latest, the two-footed tackle, Olympic football, cricket match-fixing and the cheery Andy Murray: just some of this week’s sport and media quotes compiled by JANINE SELF 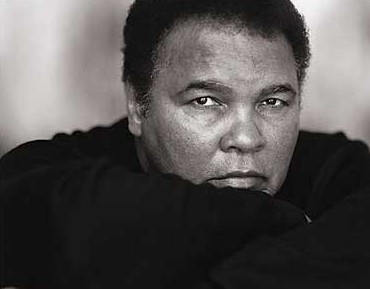 “Make no mistake, we are not just paying homage to the supreme sports personality of the 20th Century. We are honouring a colossus who waged a long and bitter battle outside the ring against bigotry and poverty in the 1960s. Perhaps that’s a much greater legacy than being remembered for floating like a butterfly and stinging like a bee” Colin Hart in The Sun on Muhammad Ali’s 70th birthday.

“Everything that I do is with a view to longevity. I would love to have a period of time at a club that wants to do great things, and I would like to drive that” Mark Hughes after taking over at QPR, his fourth club in four years.

“I’m surprised at Mancini. He had a go at Wayne Rooney trying to get one of his players sent off at the weekend, and now he is trying to get one of our players into trouble – I don’t think that’s right” Steven Gerrard after clashing with Manchester City boss Roberto Mancini in the tunnel following the Carling Cup semi-final.

“Steven Gerrard can say what he wants. I said what I think. That is what I am used to doing. It is not important what Steven Gerrard or the other players have said” Mancini bites back.

“They might have to deal perhaps with the backlash of fans. Those who live from week to week outside Scotland, who are not open to the press coverage and feedback from the Tartan Army and supporters’ clubs, do not feel the same degree of nationalistic support” Stewart Regan, the SFA chief executive, fans the flames after hearing that Wolves striker Steven Fletcher is ready to play for Great Britain at the Olympics.

“With regards to being badly advised in my comments I am a grown man and captain of my country, to which I care deeply about the future of Welsh football. I am willing to stand behind my beliefs and not leave my comments nameless” Aaron Ramsey, via Twitter, hits back at the FAW, who took him to task when he complained about the failure to consult with players about a successor to Gary Speed

“I love his sense of humour. Hopefully he enjoys mine. We’ve had some good laughs” Ivan Lendl, Andy Murray’s dour new coach.

“It is not a protest, it’s just a hairband. I wore it because I believe in equal rights for everyone” Laura Robson on the rainbow-coloured hairband she wore for her match in Melbourne, where gay rights campaigners have threatened to protest because of former champion Margaret Court’s opposition of same-sex marriage.

“Federer is too perfect – Swiss, kind – to want to cause problems. But I don’t know why he isn’t supporting the players” Nicolay Davydenko on the players’ on-going dispute with the ATP.

“I completely understand the players’ opinions, I just have a different way of going at it. Usually I think of the lower-ranked players first” Roger Federer insisting he has a social conscience.

“It wouldn’t have been the end of the world if I hadn’t made Beijing because London 2012 was always the target, but this time if I don’t make it I would have to reassess everything and would probably retire – I’d have to ask the question, ‘Have I really got four more years left in me?'” Rebecca Adlington, world and Olympic swimming champion, at 22 assesses her future in the pool.

“Pleased with my progress but there is work that remains to be done. This is my first big event with fast kids since 1996. I felt really good starting off, especially in the first 400” Janet Evans, the triple Olympic gold medal-winner in 1988, who has qualified, aged 40, for the US Olympic trials at 800 metres freestyle, Adlington’s world title event.

“Paralympians are forgotten about but we’ve become complacent and accepted it. In all the years I’ve been involved, the coverage has faded away after the Olympics finishes” Jody Cundy, a five-time gold medal-winner fears the world will have switched off by the time he races at the velodrome in September.

“Mervyn has done nothing but play cricket from the age of six. The thought of him losing all of that for a moment’s idiocy would be just a bit too much” Danny Cundy, solicitor of shamed Essex cricketer Mervyn Westfield. Westfield is awaiting sentence after admitting spot fixing.

Make sure you get your entries in. Full details and entry forms available online by clicking here