The sacking of David Moyes was announced this morning by Manchester United on Twitter, while the story was broken yesterday on newspaper websites. By STEVEN DOWNES

Whoever is considering entering for the 2014 SJA “Sports Scoop of the Year” award, it had better be a good one after the events of the past 24 hours at Manchester United.

Provenance is everything with stories such as these, with David Moyes’s “departure” (notice how some media outlets fight shy of using the word “sacked”, just in case Messrs Sue, Grabbit and Runne come knocking, presumably to defend his record at Old Trafford…) after less than a year as manager at Manchester United. But this was undoubtedly a dismissal; not even a six-year contract can provide football managers with job security. Nor, it seems, football clubs with long-term planning.

This was a football manager’s dismissal driven by the stock markets. Whatever the cost of Moyes’s departure (reports today suggest £6 million, or around the value of one year of his contract), the businessmen who run ManU Plc know that they are already down by more than £20 million income for missing out on even the group stages of next season’s Champions League, and that they also need to find someone in whom they trust with handling another £100 million-plus of transfer spending this summer. Imagine the scenes in the Glazer family’s offices in America. “Fifty million bucks for this guy with the hair, Fellaini? Are you serious?!”

Around 10 days ago, someone spotted Louis van Gaal having a meeting in Switzerland with a member of the Glazer family, within days of United going out of the Champions League, which got reported in the Dutch paper De Telegraaf. That’s what really started the hare running on the “Moyes to go” story.

Following the defeat at Everton at the weekend, with Champions League football for United a mathematical impossibility, someone from the Glazers’ team briefed a handful of Manchester-based football writers yesterday morning.

Within a couple of hours, reports that Moyes was on the way out began to appear on newspaper websites, notably Mail Online and under Mark Ogden’s byline at the Telegraph.co.uk. As it was a bank holiday Monday, the newsrooms of the nation’s broadcasters were less well-staffed than usual, but it was not long before television and radio – often match commentators live on air, sitting in commentary boxes at grounds anywhere but in Manchester – were speculating on the reports, usually citing “sources in Manchester”, when they meant someone with an iPad in the office and access to the interweb. 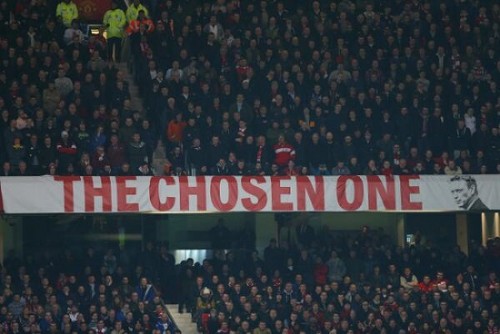 It was Ogden, of course, who broke the story a year ago that Sir Alex Ferguson would actually be relinquishing the Old Trafford hot seat, which won the Telegraph’s northern football reporter our Scoop of the Year prize for 2013. Now, as then, he and his sports desk did not wait for the morning editions to deliver their report on the world, but instead they had pressed the button and launched it on the web. “You just send it in and hope it’s right.” Ogden said, quite graciously, when accepting his SJA award last month.

The earliest time stamp we can find on Ogden’s version of the story (though these things are sometimes automatically updated) is 3.59pm yesterday; the Mail‘s Ian Ladyman’s first take online, reporting Monday’s early morning meeting between Moyes and the Manchester United CEO, Ed Woodward, at Carrington, was timed just after 11am. Of course, the Grim Reaper at Goodison on Sunday, the latest off-colour stunt by a firm of bookmakers, might claim to have scooped everyone for premonition, though with this story, it had long ago become clear that the matter at issue was not “what”, but “when”.

At times such as these, you might sometimes feel sympathy for the press officers, or the somewhat grander “communications directors”, who have to don their kid gloves and provide some official response – any response – to the gathering clamour from other media, at a time when a developing situation means that it is nigh on impossible to provide a definitive statement.

Thus, by mid-afternoon yesterday, Phil Townsend was demonstrating his years of experience working as a Whitehall spokesman when the Manchester United comms director was telling broadcasters who were late to the story, “Nothing has happened at all. I don’t know where the suggestion has come from.”

Which, at that time, was true.

As suggested before, though, key in all of this is not the quality of football played under Moyes, the trophies they might not have won this season nor Wayne Rooney’s salary package. It is the company’s share price on the New York Stock Exchange, where the club is listed as a global business. Some definitive information on such a key decision as a managerial appointment or dismissal had, under strict Stock Exchange rules, to be issued before NYSE opens later today.

So maybe the Manchester United communications team will be claiming the Scoop of the Year award. It was they, after all, who tagged their Tweet at around 8.30 this morning with the word “Breaking” (“They might want to have added ‘Exclusive’, too,” one well-respected sports reporter grumbled. On Twitter, inevitably).

The announcement of Moyes’s departure appeared simultaneously on the club’s website and Facebook page, making it something of a social media first (at least according to Rory Cellan-Jones, the BBC’s technology wallah).

The statement did run over two 140-character Twitter messages, so the ManU comms team might have need of a decent sub-editor. That’s certainly the case in King’s Cross, where in traditional Grauniad style this morning (and before they had it corrected after it was pointed out to them), someone in charge of their Twitter feed put out a link offering a timeline of Moyes’s “anus horribilis”.

And they say that the more things change, the more they stay the same…