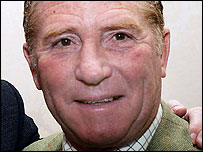 In 1966, together with his England team mates, Ball won the then Sports Writers’ Association’s Sportsman of the Year Award. It is the only time in the SJA’s six decades that a team had been honoured in such a manner.

Ball is believed to have suffered a heart attack. He was found collapsed outside his Warsash, Hampshire, home after apparently trying to tackle a bonfire that had got out of control.

Ball – the son of a former player – was a football man throughout his life. He spent last evening watching Manchester United’s European Cup semi-final with Milan. Jimmy Ball, his son, said: â€œI was talking to him last night just after the football and he was in great form. We were talking about Paul Scholesâ€™s pass.

â€œI would like him to be known as a nice man with a passion for football. He had a big heart and was very generous.â€

Alan Ball is the second member of the 1966 England side that won at Wembley to die. Bobby Moore, the captain, died of cancer in 1993.

In 2000, Ball and four other members of the World Cup-winning team were awarded the MBE for their services to football, an award which many felt was long overdue.

His club career saw Ball set transfer records when sold to Everton by Blackpool in 1966 and then to Arsenal five years later. Ball won a League Championship medal with Everton.

For England, after his debut in 1965, and although regarded as an outside right, Ball’s all-action style of play fitted perfectly with Alf Ramsey’s vision of “wingless wonders”. Ball was one of many players regarded as an individual success for England in 1966, despite his youth and inexperience Indeed, he, Geoff Hurst and Martin Peters emerged with enormous credit and eternal acclaim from the competition – and all of them were still only in single figures for caps won by the time they were named in the team for the final against West Germany. 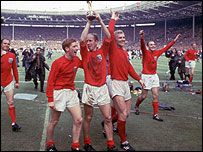 were out on their feet. With fewer than 15 minutes to go, he won a corner on the right which he promptly took. Hurst hit a shot from the edge of the area which deflected into the air and down on to the instep of Peters, who rifled England 2-1 ahead. The Germans equalised with seconds to go, meaning that the game went into extra time. Somehow, this instilled extra bounce into Ball’s play and the image of his continuous running round the Wembley pitch, socks round his ankles, is one of the most enduring of the occasion.

It was his chase and low cross which set up Hurst’s massively controversial second goal, and England’s third; he was also sprinting upfield, unmarked and screaming for a pass, as Hurst took the ball forward to smash his historic hat-trick goal with the last kick of the game.

Ball’s international career continued through to the next World Cup finals in 1970, when England arguably had a better squad, and Ball developed a midfield partnership with Manchester City duo Colin Bell and Francis Lee, who in later years, when chairman at Maine Road, recruited Ball to become his club manager.

But Ball was one of the controversial victims of Don Revie’s England reign: after captaining England to a 5-1 win over Scotland in 1975, Ball, then 30, was dropped, never to play for England again.

After his playing career had ended, Ball moved into management, with the clubs he took charge of including Portsmouth, Southampton and Manchester City.

In recent years, Ball’s family life had been tinged with tagedy, with both his wife and daughter being diagnosed with cancer. In 2004, Ball’s wife, Lesley, died, aged 57.

This prompted Ball to put his World Cup winner’s medal and other memorabilia up for auction, raising a record Â£140,000.

At the time, Ball said, “I have three children and three grandchildren, and the most important thing for me is to make sure that they are looked after as well as possible. Winning the World Cup in 1966 will stay with me forever, but it is time to look to the future, not the past.”

Affectionate tributes to Ball have been plentiful today.

Sir Geoff Hurst said he was “devastated” by news of Ball’s death. “He was man of the match in the World Cup final,” he said.

Sir Bobby Charlton agreed. “He was probably the best player that day and if it had not been for his impact the result could have been totally different. He did not appear to have a nerve in his body, and he was an inspiration to us all.”