In a sporting year like no other, JACK BANTOCK and HARRY GARSIDE make the case for two contenders for the SJA’s sportsman and sportswoman of the year prize, world snooker champion Ronnie O’Sullivan and Grand Slam winning England captain Emily Scarratt. Find out who wins on December 10th, with this year’s awards broadcast live across our social channels. 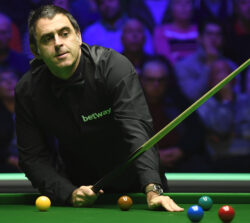 Ronnie O’Sullivan had entered and arguably decided snooker’s ‘greatest of all time’ debate long before he clinched his sixth World Championship in August, but this year’s triumph served to elevate his status even further.

It also meant a 20th Triple Crown trophy, widening the gap to Hendry’s 18, and O’Sullivan can now set his sights on another World Championship that would equal the Scotsman’s haul.

A World Championship win hardly needs any embellishment, but the context of O’Sullivan’s success made it all the more impressive, as he overcame age and in-game setbacks amidst the backdrop of a global pandemic.

Into his 28th season at 44 years and 245 days old, O’Sullivan became the second-oldest player to win a world title after Ray Reardon in 1978, 19 years after winning his first title in 2001.

Having beaten the record for the fastest ever Crucible victory in his 108-minute first-round defeat of Thepchaiya Un-Nooh before conquering China’s Ding Junhui, O’Sullivan then battled back from five frames behind to beat Welshman Mark Williams in the quarter-finals.

His greatest escape was still to come, as he pulled off a stunning comeback to win the deciding three frames against former world champion Mark Selby to set up the final against Wilson.

Wilson said: “I am not going to beat myself up too much, I am playing the greatest of all time. It was a dream come true knowing I was playing Ronnie in the final.”

In typical O’Sullivan fashion, his assessment of himself was slightly less becoming.

Speaking after his victory over Williams, he said: “There will always be a little bit like…Maradona. You look at him now, he’s big and fat but you put a ball at his feet, and the geezer’s unbelievable.”

Candidness of language aside, the comparison to a sporting icon is more than justified. 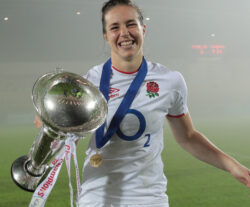 After being crowned World Rugby Women’s Player of the Year in 2019, Emily Scarratt has enjoyed another fruitful year as a centre and fullback for England and Loughborough Lightning.

Scarratt, who became England’s highest ever points scorer during this year’s Women’s Six Nations, was crowned the inaugural Women’s Six Nations Player of the Championship in November after receiving the most votes from the head coach and captain of each participating team.

The talented all-rounder captained the Red Roses against Wales and Italy as they secured their second consecutive Six Nations Grand Slam, with Scarratt scoring two tries and totalling 55 points, the most of any player in the tournament.

With the opening match against the French balanced on a knife-edge with 20 minutes to go, Scarratt made her mark with the decisive try in a 19-13 victory after a powerful direct run to ensure a successful start to the Red Roses’ campaign and a player of the match award.

The centre finished the tournament in equally impressive fashion with a spectacular score against Italy as England secured their Six Nations title with a bruising 54-0 win.

World Rugby Player of the Year @EmilyScarratt has done them all 🙌

The latest England Rugby Podcast: O2 Inside Line is available now wherever you listen to your pods 🎧

Scarratt played the most minutes of any player in the tournament, starting every match and only being substituted late on against the Italians.

Scarratt is widely regarded as one of the best English players of the last decade, as she top-scored at the 2014 World Cup, which England won thanks to her 16 points in the final, including a late converted try.

Scarratt said: “It’s a huge honour and a huge shock to win this award. Thinking back to those first four games seems like a lifetime ago and there are some great memories from the tournament.”

Six Nations Rugby CEO Ben Morel added: “I would like to congratulate Emily on winning the first-ever Women’s Six Nations Player of the Championship award.  She is an amazing player who beat tough competition to win this accolade.”

Following her successful Six Nations campaign, Scarratt was quick to make an impact for Loughborough Lightning on her return to Premier 15’s action as she scored two impressive tries against league-leaders Harlequins.