The SJA is doubling the number of broadcast prizes it will be presenting at the British Sports Journalism Awards in March, but they will still be chosen by a vote of the SJA membership.

The SJA Sports Broadcasting Awards have been expanded to better recognise the outstanding sports broadcaster and sports programme in both television and radio.

In another innovation, this year, to help the SJA membership decide who deserves your vote, there is a panel of experienced, leading personalities in broadcast journalism who have compiled shortlists of candidates in each category

Radio presenter Adrian Durham (pictured left) is at the sharp end of TalkSport’s lively daily drive time programme, while The Guardian’s Martin Kelner, as well as penning his weekly “sport on TV” column, is also a familiar voice on the airwaves. 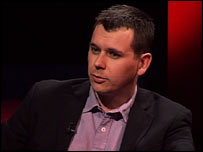 The four shortlists will be published here on sportsjournalists.co.uk shortly, together with voting forms for you to support your choice of outstanding broadcaster and programme.

The SJA’s Sports Broadcasting Awards were introduced in 2005, since when one man and one programme have dominated.

Sky Sport’s Jeff Stelling has won the broadcaster prize four times for anchoring his Saturday afternoon phenomenon Soccer Saturday, while Radio 5’s Sportsweek has proved unbeatable since 2006, thanks to being required listening every Sunday for all in the business.

□ Sky Bet is the SJA’s newest partner, the sponsorship being announced in October 2008.

Together with the SJA’s other lead sponsor, UK Sport, both partners support our two prestigious annual awards events, including the Sky Bet sports betting writer of the year at the SJA’s British Sports Journalism Awards.

The 2009 SJA British Sports Journalism Awards will be presented at The Brewery, in London, on Monday, March 8 2010.