VIEW FROM THE PRESSBOX: Do you always know the true identity of the person who has written the article you’re reading? This one is by ADRIAN WARNER

The world’s sports media is likely to spend a lot of this year, and quite a bit of 2017, too, slamming the ethical standards of governing bodies such as FIFA and IAAF.

The people who run football and athletics will be accused of cover-ups and a lack of transparency in their work. There will be more calls for other organisations and personalities to run international sport and for key figures to be sacked. And, mostly, quite rightly so. 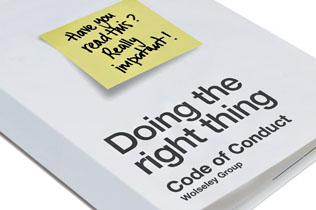 But at a time when we will get to play high and mighty with morals on a regular basis, I wonder whether it is time for our own industry to have a fresh code of ethical conduct in sports reporting so that nobody can throw insults at us and suggest we live in glass houses.

I am not suggesting that sports journalism in Britain is corrupt. But there are two areas of the massive changes going on in our industry which pose problems, in my opinion, and should be part of any new code.

The first relates to the increasing trend of media groups to have their coverage of events and stories directly sponsored by major companies. The second relates to how we credit quotes, reports and exclusives, at a time when information flies around social media in seconds.

I am working with leading journalists and universities to draw up a Code of Conduct which I hope the Sports Journalists’ Association will adopt as best practice. I would welcome as much input as possible from SJA members and our colleagues in the business so that a code could be meaningful.

This is not Levesonesque, but I do believe 2016 should be the time when we become more transparent about what we do.

Newspapers are increasingly using sponsorship to subsidise their reporting and we have seen examples of this with British Lions tours and tennis tournaments abroad as well as with the recent Rugby World Cup on home soil. I heard the other day of a leading company choosing the content of its website — that is, which sports it covers and the amount of coverage involved — according to the commercial partnerships it can seal.

That means that it is possible in the future, in terms of coverage, that the popularity of a sport could become less important than the sponsorship it is driving.

So, is it time to tell all readers clearly about these deals and be completely open about them across all groups?

The Guardian clearly got financial backing from Heineken for its Rugby World Cup coverage, with the company’s logo used below bylines. As one of the tournament’s key sponsors, the website told readers about the way it deals with extra funding.

“Guardian News & Media produces a variety of content with funding from outside parties,” it said. “These sources of revenue allow us to explore, in more depth than editorial budgets would otherwise allow, topics that we hope are of interest to Guardian and Observer readers. The presentation of the content makes clear how the content has been commissioned and produced, and who has funded it. One of three labels will appear on this content: ‘Sponsored by’; ‘Brought to you by’; or ‘Supported by’.”

This should be standard practice — and also more accessible for readers. By that, I mean, not hidden away. There is an argument that websites should also tell their readers that some sports get extra coverage because of sponsorship.

I wonder, also, if it is time for us to tell our readers more about freebies. Why shouldn’t editors admit that a hotel or a flight was paid for by event organisers or sponsors – or indeed a Government – to enable a reporter to cover an event?

The second issue relates to something which I have been surprised about for decades. Other countries are quick to tell their readers whether their quotes, pictures and TV footage comes from agency sources, while British newspapers have for years attempted to give the impression that all of their content is their own.

So as a former Reuters reporter, I often saw my work appear under somebody else’s byline in Britain  – even exclusive quotes or stories — whilst the rest of the world credited either me or Reuters. Some British papers even made up the name of fictional correspondents to put above my stories. I evenn changed sex for 600 words.

Surely, in a world when I can press a button on my laptop and see whether a student’s essay contains information taken directly from the internet or from another student’s work, the sports journalism industry needs to come clean about all material?

Accurate attribution makes it easier for readers to judge the value of information in terms of reliability. It also stops journalists from claiming false exclusives when a story has broken in another country or on another platform.

Is this all too radical?

What else should a Code of Conduct contain? I am interested in hearing your views. Please email me at adrian.warner@beds.ac.uk with your suggestions.