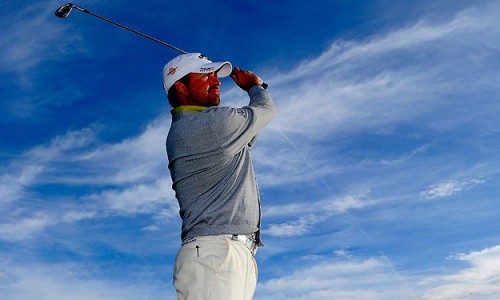 WHO WILL GET YOUR VOTE? Past chairman of the SJA, PAUL TROW, thinks he has an unanswerable argument for a Northern Ireland golfer’s case as 2010 Sportsman of the Year

I thought it would be a done deal, but, belatedly, I’ve been given to understand that some advocacy might be needed to push my man across the line.

As ever, there are plenty of worthy candidates for the SJA’s Sportsman of the Year award, and all of them are guaranteed to garner a shed-load of votes.

Surely, though, one of them towers above all others – not for one, brief, blink-of-the-eye achievement, but for two measured triumphs under the fiercest of pressure in the hottest and most demanding of sporting cauldrons.

Ladies and gentlemen, I give you Graeme McDowell.

Let’s start at the beginning. A year ago, the only story in golf – in the whole of sport, actually – involved a fire hydrant, 14 blonde, woodwork-emerging bimbos, and a 9-iron wielding wife (also blonde) in banshee mode. Needless to say, Tiger Woods swiftly withdrew from the December tournament of his own creation, the Chevron World Challenge in California, due to the fall-out from this late-night Thanksgiving Day incident outside his home in Florida.

As a result of Woods’ enforced nosedive underground, a place in the Chevron field opened up for one of the promising young (occasional) shavers on the reserve list, our friend from Portrush in Northern Ireland.

Thus began one of the most amazing 12-month journeys in world sport. McDowell, who celebrated his 31st birthday in July, cashed in on his opportunity with aplomb, coming a close second at Sherwood Country Club to Jim Furyk. That result was worth enough world-ranking points to propel him into the top 50 and, more importantly, it secured automatic qualification for the 2010 Masters and the two early-season World Golf Championship (WGC) events.

“Getting into the Chevron was really the catalyst,” McDowell says. But to be fair, he already had a pedigree to die for.

McDowell had played in both the Walker and Ryder Cup, won several tournaments on the European Tour, and finished runner-up with fellow Ulsterman Rory McIlroy when representing Ireland in the 2009 World Cup of Golf.

But his defining moment did not come until Sunday June 20. McDowell had arrived for the 110th US Open at Pebble Beach distinctly under the radar.

What transpired on the Monterey Peninsula in California was both bewildering and inspirational. Forty years after Tony Jacklin claimed the title, and a full nine decades after Ted Ray had triumphed in that tournament, the United Kingdom of Great Britain and Northern Ireland had another US Open champion to toast.

Starting out three shots behind third-round leader Dustin Johnson, McDowell displayed commendable maturity and patience as he reeled his adversary in and then applied his considerable intellect to controlling the outcome of the title.

His margin of victory was one shot, but it might as well have been six – because he was never going to do the old-fashioned “British” thing and chuck it away as he plotted his way down Pebble Beach’s infamous, closing par-5 hole.

Understandably, our man took most of the summer off to celebrate his first Major win. By the autumn, though, he had his game face back on. His next great assignment was the 38th Ryder Cup with Europe, vying to claw back the trophy that was surrendered so unsatisfactorily two years previously.

The old saying, “when the going gets tough, the tough get going”, could not have applied better than to McDowell.

At Celtic Manor on Monday afternoon for the delayed singles, the going got very tough, so much so that, for the last few holes of his match with Hunter Mahan, McDowell knew that the fate of the Ryder Cup lay in his hands.

Mahan was dialed in to the reality of the situation as well, so what transpired was a classic mano-a-mano between two of the post-Tiger wannabes. In all honesty, it was no contest, except for the fact that someone had to take a physical step across the line to secure victory.

McDowell, once he’d learned from skipper Colin Montgomerie what he had to do, was magnificent. The 16th hole on the Twenty Ten Course is a definite birdie opportunity in normal play, but a somewhat different challenge with the Ryder Cup and millions of pounds worth of European Tour sponsorship for generations to come riding on it.

So what did our man do? He birdied it, a fantastic, left-to-right-breaking 10-foot putt dropping in through the side door.

Hole 17, in case anyone doubts the sheer brilliance and nerve involved in such conflict, demonstrated how much pressure is involved when the Ryder Cup is at stake. McDowell, teeing off first, was just off the green; then Mahan “fatted” his tee just short. He should have been able to cope with the pressure, but instead he totally chunked his chip with the worst action from a pro ever seen on television.

Moments later, Britain’s sportsman of the year cleaned up. His match was won by 3 & 1, the Ryder Cup secured by that solitary point. Ecstasy!

Tell me, who can argue against this man as the SJA’s 2010 winner? Obviously I can’t.

WHO WILL GET YOUR VOTE?

Who is worthy of your vote? Check out our experts’ views here:

Voting forms are being posted to members with the SJA Bulletin autumn edition, or you may vote online.

Deadline for voting is November 9.

Tickets to attend the SJA British Sports Awards on December 8 are also now on sale.