By Steven Downes
The SJA delivered another lunchtime coup on Monday. Short of inviting the restored England No10 himself to lunch at the

Olde Bank of England (and apparently, he wouldn’t have been allowed to sample the treacle pudding any way), the Sports Journalists’ Association guest was, as The Times put it, “the man who knows Jonny Wilkinson better than anyone”.

Rob Andrew, England’s director of elite rugby, was on hand in Fleet Street to pass on his inside insight behind Brian Ashton’s headline-grabbing selections to a gathering of more than 30 members and guests in the hour before the England XV for Saturday’s Calcutta Cup match was formally announced.

Even Andrew himself had to wait for confirmation of the team, but thanks to some deft planning by our chairman Barry Newcombe, he proved to be a most timely guest to talk on Wilkinson’s first rugby international since he kicked the three points that won the World Cup for England in 2003.

“He has had long periods over the past two years when he must have had dark moments wondering if he would ever get the opportunity to play again,” Andrew confided. “So this is like a fresh start for him.

“Itâ€™s a travesty that he hasnâ€™t played for England since the World Cup final but itâ€™s fantastic to see him back. The view from people like Steve Black, the fitness coach at Newcastle, is that heâ€™s flying.”

Andrew, of course, has followed Wilkinson’s career as closely as anyone, having recruited him for Newcastle when he was still a schoolboy in Hampshire. Andrew told the gathering that Ashton had made the decision to select Wilkinson only after a lengthy conversation with the player on Sunday night.

Andrew remains convinced that after coming through so many injuries, some of them career-threatening, over the past three years, Wilkinson can again be one of the world’s top players, and perhaps eventually be better than ever.

“I always felt he would come back and if his body gave him a chance he could go on to be a better player than he was at the World Cup. He was only 24. Physically he is getting better.

“From the work he has done in the last two or three years, he is getting sharper, getting more experienced and he is still only 27. He still hasn’t reached the peak of his powers.

“In the past six months or so I have seen a different Jonny, one who is really going to enjoy the rest of his rugby career. I always felt he would come back and if his body gives him a chance, he could go on to be a better player than he was at the World Cup. Physically, heâ€™s getting stronger. Heâ€™s sharper and more experienced as a person.”

“Jonny is an extraordinary individual,” said Andrew. “When he has come back before 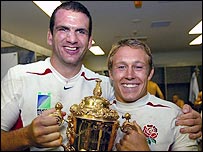 he has looked virtually ready from the first time he has touched the ball. I think that is what convinced Brian.

“In international sport there is always a risk – there is a risk picking Andy Farrell – but I’m sure Jonny wouldn’t allow himself to be in this position if he wasn’t 110 per cent certain that he was ready and able to take it on” Andrew said of the selection of a fly half who has played less than 50 minutes of rugby this season.

“I’m sure it will be a massive morale-boost for everyone, not just in the team but around the country, too. The options were Shane Geraghty and Toby Flood at fly half. If Charlie Hodgson had been fit maybe the decision would have been different, maybe Jonny would have been on the bench.”

Wilkinson, pictured above with his World Cup-winning captain Martin Johnson, has almost seemed cursed as an injured shoulder, groin, both knees, appendix and a bicep have kept him out for long periods. The latest injury, a lacerated kidney, was suffered against Bristol just two months ago.

Andrew was remarkably frank about his assessment of Wilkinson, and clearly delighted by the news, but was also very optimistic about the selection as a whole of what he called “Brian’s team”.

Andrew was careful to sidestep any of the more charged questions about player commitments and the number of overseas players at English clubs, areas of concern which he is expected to have to deal with in his RFU role in the future.

Andrew also cautioned against raising expectations of the England side too high, too quickly. He said: “England have never been in this position in the modern era, where they have lost eight of their last nine games.

“On paper this has got a good feel about it. There is experience and balance to the team. But the 2003 team spent the previous four or five years together. This team hasn’t played a Test yet. The next couple of months are very important. But if the team gels quickly and effectively it could be very exciting.”

In the SJA’s customary style, Andrew was thanked for his presence with the presentation of a framed Kevin Macey original cartoon, which depicted him kicking one of his questioners into touch. “That must be you, Terry,” Andrew quipped to veteran writer Terry O’Connor.

The Association hopes to return to Fleet Street for another high-profile sports lunch in the near future.

Read about the SJA’s lunch with Bill Sweetenham by clicking here.