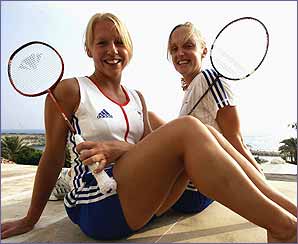 The British Olympic badminton team, including Gail Emms and Donna Kellogg, will be available at the NIA, Birmingham, on Wednesday, July 23.

This will be the final opportunity for the media to interview, film and photograph the Badminton players ahead of competition in Beijing.

WHERE: The NIA, King Edwards Road, Birmingham B1 2AA

The session will have to run to timetable because the players have an afternoon session of matches to follow and it is essential that the media session does not over-run. Lengthy one on ones will not be possible because of the tight schedule but there will be opportunity to move from one player or coach to another for interviews.

CAR PARKING:
Parking is available in the multi-storey at the NIA on a pay-and-display basis.

The seeds for the Olympic Games will be confirmed on Thursday 24 July (they are based on the world rankings of 1 May – see www.worldbadminton.net ). There will be eight seeds in singles events and four in doubles.

The draw will be on Saturday 26 July.

The Olympic Badminton will be 9-17 August

Games record:
For Robertson and Kellogg, Beijing will be their third Olympic Games.
Men’s singles player Smith (Portsmouth), the youngest member of the squad at 24, will be competing in his first Olympics.

Clark and Kellogg are the European mixed doubles champions and were 2006 world runners-up.

Emms and Kellogg were the 2006 European champions and 2008 silver medallists in women’s doubles.