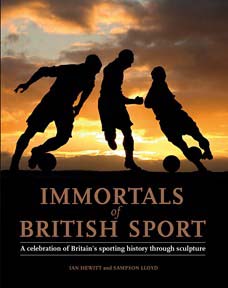 Here’s a question for the pub quiz tonight: how many of Britain’s sporting heroes have been commemorated in sculptures and memorials? If your contestants are anything like me, then they might not be able to call up as many as a dozen names – Sir Stanley Matthews, Bill Shankly, Herbert Chapman, Sir Tom Finney, Billy Bremner, Sir Matt Busby, Brian Clough (two of him, one with Peter Taylor), Arkle … and then I am struggling. Oh, I mustn’t forget Steve Bloomer, of course, although you’d probably have to be a local, or at least a Rams fan, to know that a bust of the great 19th and early 20th century goalscorer oversees the action at Pride Park.

Now, however, there is a book to consult. Not just any book, but one of the most sumptuous and beautiful sports books that it has ever been my good fortune to hold.

These days, given the weight of volumes that set my bookshelves groaning, review copies almost always end up at the local charity shop. But not Immortals of British Sport: A Celebration of Britain’s Sporting History Through Sculpture. This magnificent work will hold a pride of place on my shelf, even if half a dozen others have to be sacrificed to the Cats Protection League to make way for it.

The words come from lawyer, Southampton FC supporter and former county tennis player, Ian Hewitt, who sits on the management committee of the Wimbledon Championships. He is the co-author of Centre Court: The Jewel in Wimbledon’s Crown (2009) and Wimbledon: Visions of the Championships (2011), both of which, with Vision Sports Publishing, won the Best Illustrated Book Award at the annual British Sports Book Awards. He is also the author of Sporting Justice which sportsjournalists.co.uk reviewed in 2009.

The photographs in this latest work are the work of Sampson Lloyd, who trained in theatre design before becoming an art teacher and then a freelance photographer. Lloyd has contributed the primary images to several books including The Landscapes of London and The Landscape of Scotland and he is the official photographer to the annual British Military Tournament.

The result of their collaboration is a stunning, fascinating, often surprising journey in discovery of the diverse and inspiring monuments that celebrate the men, women – and horses and greyhounds – that have shaped Britain’s sporting history.

From WG Grace to Sir Steve Redgrave, from Prince Obolensky to Red Rum, from Jack Hobbs to Tom Sayers, a vast array of sporting figures are captured in these pages. Many are world famous, some are well-known, but others are totally unexpected. From 18th century prize fighters to modern-day footballers, cricketers, Olympic athletes, cyclists, golfers, even a bowls player, Immortals of British Sport covers more than 20 sports in eight chapters that explore different eras and unlock the rich treasures of Britain’s sporting past. There is even a map of where to find them.

I’ve been through the book a dozen times, trying to decide which is my favourite sculpture. Eventually, I gave up. I can’t even decide which is my least favourite. They are all, in their own way, magnificent representations of our sporting heroes, sung and unsung.

This is, in my opinion, one of the most important books on sport to have been published in this or any other era. If it isn’t a shoo-in for a third award for Hewitt and Vision Sports Publishing, then I can’t wait to see what might beat it.