One of the delights at the British Sports Journalism Awards event is seeing the photographers shed their waterproofs and thermals and, er, let their hair down.

This year, the party had to be at home but the wonderful Jakki Moores, press segment manager at Canon, made sure that everyone on the shortlist received a Rick Stein meal as they watched the virtual ceremony.

Clive Mason was runaway winner in the Sports Picture and Specialist Portfolio categories and recipient of the Canon Sports Photographer of the Year (Ed Lacey Trophy).

It is the second time he has lifted the ultimate prize after winning in 2002.

As the events of last nights @SportSJA awards sink in, I’d like to thank @JakkiMoores from @CanonUKandIE once more for the really nice touch of buying the nominees dinner by way of a @RickSteinRest food box. I’m having mine on Friday, can’t wait! Thank you Jakki 🙏🥂📸

Turns out he can give a speech too.

Mason said: “Oh What A Night – It may not have been the traditional awards night that we are all accustomed to but boy oh boy, did the Sports Journalists’ Association do a stellar job on their digital presentation of the 2020 edition of the awards last night, hosted and presented as always, by the legend that is Jim Rosenthal.

“Huge thanks must go to all my colleagues, friends, bosses both at Getty Images and further afield for supporting me, encouraging me and keeping me sane as I knot myself up when things don’t go quite to plan, so thank you all!

“Also, thank you to Jakki Moores from Canon for sponsoring, the SJA, F1 for the access, Rob MacNeice at Nikon for nursing me and my kit when I break something. Also the judges, Simon Bruty, Bob Martin, Rebecca Naden Matt Fearn Kent Gavin, Paul Gilham Dave Thompson and Stuart Robinson.

“My biggest thanks however go to my wife, Katie Mason for supporting me and looking after our children during my regular absences, thanks hun.”

Michael Regan, a Getty Images stablemate of Mason’s, reflected on the current difficulties that the media has of actually getting into a football ground because of Covid restrictions.

His response to winning the Football Portfolio: “I can’t accept this without acknowledging this has been a tough, tough year for football photographers. Let’s get everyone back into games as soon as possible and I’ll get back to finishing 7th.”

Michael Steele, another top operator for Getty Images, showed his versatility with images from cricket, rugby, and surely a first for the SJA – pigeon racing. As the judges put it: “It’s been a difficult year for putting together a multi-sport portfolio and the judges commended everyone on the shortlist for producing such a fine set of images.”

Anyone who has had the fortune of seeing Guardian photographer Tom Jenkins at work will testify that he is a smooth operator with a camera.

It turns out that the winner of the Away from the Action category can look just as debonair when he’s not working.

Jenkins, a valuable member of the SJA committee, continuing the theme of dinner, posted this gem as he thanked the SJA for his award. 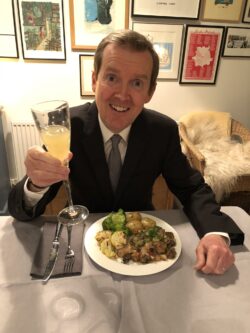 On his Instagram, Tom explained the story behind his winning image (see in gallery above), taken at Canvey Island FC’s Park Lane ground on a wet night in November.

The future is bright, especially for Harry Murphy of Sportsfile, who won the Young Photographer award.

He tweeted: “I don’t really know what to say here. Thank you so much to my colleagues, family and friends, think I’ll have a beer”

Then, a swift follow-up: “… and to my wonderful Girlfriend Izzy, who has kindly told me I’m on the sofa tonight for not including her in this tweet.”