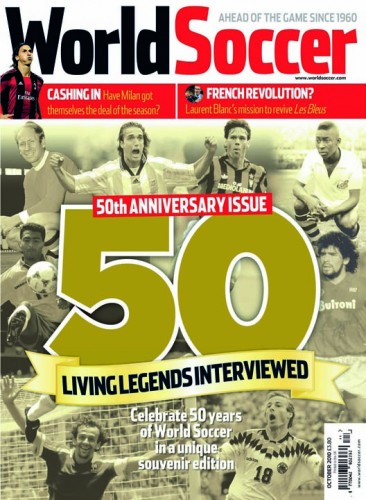 World Soccer is 50 years old tomorrow, and the title – with present owners IPC Media seeking a buyer – is celebrating with a special anniversary issue featuring interviews with 50 players of the past half-century.

Most of the interviews have been conducted by the magazine’s long-standing correspondents.

They include Bobby Charlton by Jim Holden, Pele by Keir Radnedge, Diego Maradona by Eric Weil and Emilio Butregueno by Sid Lowe.

“I know a lot of SJA members have contributed to the magazine since the launch in October 1960, and many more have been regular readers,” World Soccer‘s Editor, Gavin Hamilton, told sportsjournalists.co.uk.

“I’ve always encouraged my staff to help colleagues from across the industry when they contact the office with enquiries. We like to think that mutual support has contributed to our success and enhanced our reputation.”

The list of contributors to the magazine includes Jack Rollin, who was associate editor on the early issues and later became Editor; Brian Glanville, who first contributed in 1963; and Radnedge, who made his debut in 1965.

“The longevity of World Soccer has been built on our network of correspondents around the world,” Hamilton said.

“It’s always been our aim to have the best English-speaking football writer in every major football capital. That remains the case.”

IPC Media, owned by Time Warner, is conducting a review of its specialist magazines, which include World Soccer. The process is likely to result in the sale of World Soccer to another publisher. “Negotiations are ongoing,” said Hamilton. “I’m optimistic that the magazine is in safe hands.

“For 50 years, we’ve enjoyed a rich heritage and developed a global reputation. Hopefully, we still have a bright future.”