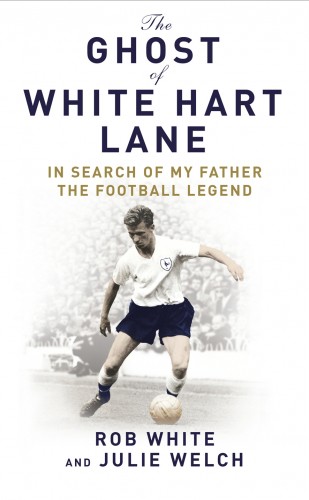 Almost half a century after John White’s death, the son of the former Tottenham player has written a book in search of the legend. PETER WILSON reviews The Ghost of White Hart Lane

For those of us old enough to remember the death of the Tottenham player John White, it was one of those moments when you remember vividly where you were when you heard about it, just like JFK’s assassination and 9/11.

I was a football-mad nine-year-old when my mother told me. My mother had just finished work at Odhams Press, and showed me her “voucher” copy of the Daily Mirror, with the Scottish international’s fate under a tree on a golf course in Enfield, hit by lightning, making the front page on July 22, 1964.

By that stage I was an Arsenal supporter, having just five months earlier visited Highbury for the first time to see the Gunners lose against Liverpool in the FA Cup. The death of the Tottenham favourite was as shocking to me as if it had been one of my new-found heroes.

White was a marvellous inside-forward, the first player I ever heard associated with the phrase “ahead of his time”. He might have been a lightweight on the scales, but not on the pitch, where this slender figure, who could evade defenders with such skill and precision that he was nicknamed “the ghost”, was as influential in Tottenham’s 1961 Double side as Danny Blanchflower, Dave Mackay, Bobby Smith or his closet friend at White Hart Lane, Cliff Jones.

The story of White’s short life has been a long time coming but has arrived with The Ghost of White Hart Lane: In Search Of My Father The Football Legend. It is a collaboration between White’s youngest child, Rob, who was just a few months old when his father died, and Julie Welch, whose name on the cover of any book, or byline at the top of any story, is always a hint of the quality ahead.

The book combines the life of the footballer with Rob’s quest to find out more about his father. The biography part is pretty straightforward, taking us from White’s early years in Fisherrow, Musselburgh, where he was brought up by his mother and aunts after his father’s early death, through spells at Alloa and Falkirk, before his transfer to Tottenham and fame both domestically, internationally and on the European stage, up to his early death.

White helped Tottenham become the first side to win the Double in modern times (are we still in modern times? Or post-modern?) and the first British club to lift a European trophy, the Cup Winners’ Cup in 1963. His death came at 27, when he was in his prime and just as Bill Nicholson, the Tottenham manager, was about to rebuild the team around him.

The Double side was breaking up at the time of White’s death, which signalled the end of the glory days. Tottenham have gone on to win cups since then, with even minor European success, but a league title has been missing and they have never had a side that has enjoyed the success or had the quality of the early ’60s Glory Boys – although Harry Redknapp is doing a good job of trying to put that right now.

Where the book does not convince are the chapters that form Rob’s memoir. He wants to find out more about the father he never knew, but we do not get enough of that.

Rob, a photographer, is fortunate to have what a lot of children who grow up without a parent, sometimes two, do not have: the reference points that help him trace his father’s short life. Not that many can see film of the dad they did not know appear on screen while they are waiting for a cup final to kick off, or newspaper reports you can read with pride and wonder.

It is when he has two young children of his own that he appears to start researching his father’s life and career fully. It does seem a missed opportunity that had he embarked on this project earlier, when more of the people John White grew up with, played with and against, were still alive, we could have enjoyed more anecdotes and formed an even better picture of the man than we get here.

Rob traces his father’s footsteps, back to Scotland, speaks with family, friends and colleagues with their distant memories of him, belatedly visits the scene of his death – yes, the tree is still there – and briefly investigates the whereabouts of his father’s ashes, although he eventually relies on an article Blanchflower wrote saying that they were scattered over White Hart Lane. Strangely nobody in the White family remembers that.

His desire to find out more about his father is vital to the book, but you are left feeling so much more could have been added. Bizarrely, Rob writes that he derives “comfort” that his dad died when he did after speaking with Blanchflower’s own son, who remembers his father “died a broken man of Alzheimer’s”. We all die in the end, and most times in painful and distressing circumstances, so I’m not sure that’s a good reason to check out at 27, sporting icon or not.

We find out that Rob exploits his father’s death for chatting up girls. “As I got older there was, of course, one brilliant perk that came from having a famous footballer for a dad, and one who died in such eye-poppingly daft circumstances. It provided some of the greatest chatting-up opportunities a teenage boy could wish for,” he writes.

He remembers how he saw his father in action for the first time when film of John White playing for Spurs is shown on television on cup final day in 1973, when Rob was nine. It was around this time he would sit in the Derby County dugout, taken by the club’s manager and close friend and teammate of his father’s, Dave Mackay.

He later goes to a clairvoyant’s show and even dabbles in a séance at a friend’s house.

As with many footballers’ biographies, or autobiographies, there are a lot of details about what happens on the pitch, but very little of what he was like off the pitch. What music did he like (please not just Kenneth McKellar)? What were his favourite movies or television or food? Did he have a view on politics? Or indeed anything else outside of football? This book certainly does not dispel the view that in their spare time, footballers are just frustrated golfers.

While White’s early years are covered well – even the fact that he fathered a child who he had nothing to do with after the birth – his home life with Sandra, his wife, Rob’s mother, and the daughter of Nicholson’s assistant, Harry Evans, remains much of a mystery.

The passage on John’s death is poignant and so well detailed that you can pinpoint all the different moments when just a delay here or a change of mind there could have led to White surviving the day and still being alive when his wife arrived to pick him up from the golf club.

More on the aftermath of his death could have been revealed, though. Nicholson in his memoirs, as detailed in Brian Scovell’s excellent biography, Bill Nicholson: Football Perfectionist, which was published last year, wrote that he felt Tottenham did not do enough for the White family after John’s death. That is not covered here.

Rob ends having a Kevin Costner moment: “I’ll meet him at last. He’ll be at the end of Links Street, a tantalisingly ghostly figure at first… And that’ll be us, together at last in endless boyhood, kicking a ball around on the ash pitch till midnight, long after everybody else has gone home.”

Whether this book brings Rob some sort of – dare I say the word – closure, only he will know. But with the people who knew John White dying off at regular intervals – Bobby Smith went in September – little time remains for him to add to this portrait of his father.

What Rob White and Julie Welch have achieved is to allow some of us who can recollect John White, even vaguely, to remember him again, and those who didn’t to learn about one of the great footballers, who was crucial to a golden period for Tottenham and Scotland, and who was a joker and pretty much a cracking guy.

This is a great read, and could impress the judges who decide the shortlist for sports book of the year. Of course, whether it wins might depend on if Duncan Hamilton brings out another tome this year.