Today marks the 30th anniversary of the Heysel Stadium disaster in Brussels, when before the European Cup final, as Liverpool and Juventus fans fought, a stadium wall collapsed – 39 people died and 600 were injured.

PHILIP BARKER reflects how TV, radio and newspapers tried to report the events as they unfolded before them

It was, by common consent, the final everyone wanted to see. Reigning European Cup-holders Liverpool against Italy’s Juventus. “A confrontation of Anglo-Italian interests promises to hold Europe enthralled,” wrote David Lacey in The Guardian.

World Soccer’s Keir Radnedge also relished “the two most highly rated clubs in Europe over the past few years meeting at last in the game’s showpiece”.

The date of that European Cup final was May 29, 1985, and the venue was the Heysel Stadium in Brussels.

Mike Ingham , this year’s SJA Doug Gardner Award-winner, was in the Heysel stadium that night for the BBC, and he is set to present a documentary on that grim occasion . ”I have no memory of describing any of the football played that night. It was a complete irrelevance.”

The May of 30 years ago had already been touched by tragedy when 56 perished in the fire at Bradford City’s ground. Another young fan died in a football riot at Birmingham.

Against this backdrop, it is easy to forget English clubs had dominated the European Cup for the best part of a decade. Liverpool, Nottingham Forest and Aston Villa had all lifted the trophy since 1977.

On the night of the 1985 European Cup final, Jimmy Hill appeared on BBC’s television coverage with an ominous bulletin: “The news is very bad from Brussels, hooliganism has struck again and I’m afraid the scenes are as bad as anything we’ve seen for a long, long time.”

THE ROAD TO HEYSEL – A DECADE OF SHAME 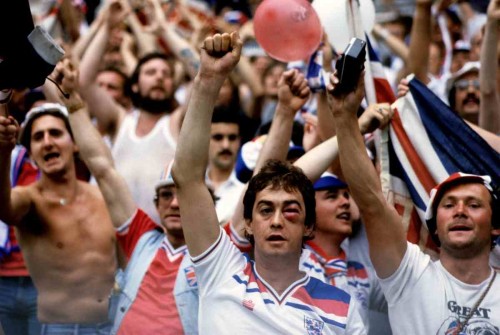 At Heysel, BBC News carried a report from reporter Wesley Kerr who was positioned close to the scene of the trouble.

“Amazingly it took many minutes for the medical services to move in. Instead in an astonishing display of insensitivity, the authorities deployed armed riot police.By this time, as police dealt with a supposed riot, it had become clear a slaughter had occurred,” Kerr said.

The following weekend, the Sunday Times described his report as “inept”, as newspapers trained their sights on the BBC for showing the match at all. It was a decision the Daily Express described as “verging on the obscene” and the Evening Standard described as “indefensible”. It did not pass unnoticed that German and Swiss television decided not to screen the match after the violence.

Although the BBC came in for criticism, the commentators for television and radio were acclaimed for their work in the most demanding circumstances. SJA stalwart Barry Davies spoke of, “A sickening and bewildering sight. What we have seen has saddened the eye and made us feel quite wretched.”

Alongside Davies was Bobby Charlton. It was 17 years to the very day that he had lifted the European Cup at Wembley. This was horribly different occasion. Charlton told viewers, “I felt very, very frightened indeed. It is a disgrace the way people behave when they come into a football match. How do you explain it?”

Ingham was in the radio commentary box alongside his colleague Peter Jones and European Cup-winning Liverpool captain, Emlyn Hughes. Jones, who had brought football alive on radio for almost 20 years, calmly described the terrible scenes before him.

The following day, he reflected on what he had seen. “We had to talk about the rioting for an hour and a half before the game actually got underway and that was so horrendous because we were actually seeing people carried just below us on stretchers.

“We’re talking about gratuitous violence. I saw lumps of concrete being hurled at people, I saw steel spikes being thrown at people and I saw people tumble down terraces and die.”

The match was to have been a fitting farewell for Liverpool manager Joe Fagan. Instead, he found himself on the field at the height of the fighting, appealing for calm.

“I will never be able to forget my last game. It upset me very, very much. Not for the match. What is a game of football when so many people are dead?” he said.

For Powell watching the match after the slaughter became “a grotesque, macabre and dehumanising experience.”

His paper did not include a report on the game itself. “We felt that in the context of Jeff’s piece, a sports report would be inappropriate.” Powell later joined other reporters summoned to Downing Street by Prime Minister Margaret Thatcher for a debrief. The FA withdrew all English clubs from European competition a few days later. UEFA’s ban on English clubs ultimately lasted five years..

“Why should a peace-loving people turn their capital into an armed camp just so that Liverpool and Juventus fans can be kept from each others throats?” asked the Daily Mirror.

“Chase the English from our stadiums forever” said one Brussels paper. Another called it “the Apocalypse”.

In Italy, Corriere della Sera talked of “Massacre for a Cup”. In Paris, L’Equipe, a paper which had been instrumental in founding the European Cup had a sad conclusion: “If this is what football has become, let it die.”

Ian Wooldridge was typically forthright. “Now you and I are the scum of the world and if you do not believe that, just read the newspapers in New York and Munich ,Tokyo, Melbourne, Johannesburg and particularly Moscow. They will judge us by association and if you wish to be associated with what happened, then I don’t.”

BBC Radio Sport also chose Wooldridge to present their review of the year. Even by December, his anger at what he had witnessed that May evening had not dimmed. “For hooliganism, read anarchy, the lawless breaking down of even the most primitive standards of behaviour.”

The memories of that terrible night remained with many who were there.

“I love Brussels, it is a beautiful city,” Jones reflected. “I cannot even tell you what the weather was like. I simply sat there, ashamed and horrified.”