Before Fergie, there was Howard Kendall. PETER WILSON reviews the latest autobiography from the former Everton manager

With the football world eagerly anticipating the latest biography from Sir Alex Ferguson in October, penned by the sure hand of the Daily Telegraph’s Paul Hayward, we get the opportunity of a starter before the main course arrives. 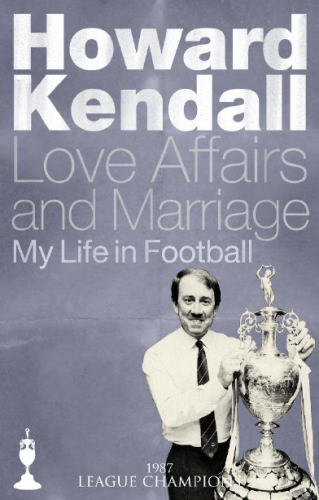 Howard Kendall’s greatest years as a manager were ending as Fergie was just squeezing into the Old Trafford hot seat. Kendall’s decision to leave Everton in 1987, though, might well go down as one of the worst taken by a football manager at the height of his powers.

From the title of the book, you might think this is a kiss-and-tell story. It is in a way: the “marriage” Kendall refers to is Everton Football Club; the “love affairs” are the other clubs he played for and managed.

With the help of James Corbett, an Everton specialist, Kendall attempts to fill any gaps left by his 1991 autobiography, including, he writes, the real reason why he left Goodison Park just as they were enjoying their greatest period of success.

Kendall rose to prominence when, at 17 years and 345 days, he became the youngest player to grace a Wembley FA Cup final when he turned out for Preston in their 1964 defeat by West Ham. He went on to be part of one of the finest midfields of his generation, alongside Alan Ball and Colin Harvey – “The Holy Trinity” – in an Everton side that won the 1969-1970 First Division title.

His playing career, though, never reached the heights that many predicted when he stepped on to the Wembley turf. He was never capped by England, although represented them at schoolboy, youth and under-23 levels, and once he left Everton as a player – with stop-offs in Birmingham, Stoke and Blackburn – it was as if the success also departed. It is quite clear from this book how his career in management echoed his playing days: Everton or bust.

The first part of the book is pretty much the usual footballer’s tale of growing up, playing the game as a child, being spotted and becoming a professional. Like most football autobiographies/biographies you learn very little about the man outside of the game. We are not even informed that Kendall is married with three children until he is player-manager of Blackburn Rovers, and Crystal Palace make an approach in 1980 for him to replace Terry Venables.

It is his subsequent move back “home” to Everton a year later where the book climbs to another level. From then on it becomes an anatomy of a football manager – how to build a championship-winning team.

Indeed, there are many similarities with Ferguson’s first few years at Manchester United: the early failures while trying to bring a vision to reality, leading to fans demanding the sack; the initial failures in the transfer market; building a side with a mixture of youth and experience; and the shadow of a much more successful club nearby – in both their cases that club was Liverpool.

Kendall, though, could well be credited with being the manager who initiated the beginning of the end for Liverpool’s domination of English football – a baton picked up by George Graham at Arsenal and passed on to Ferguson. He won two league titles, an FA Cup and the European Cup Winners’ Cup. It was only Ron Atkinson’s Manchester United who denied Everton being the first club to win the Double and a European trophy in the same season when they beat them in the 1985 FA Cup final.

Because of the Heysel stadium disaster, 11 days after that FA Cup defeat, when 39 people died as Liverpool supporters rioted before the European Cup final against Juventus, English clubs were banned from European competition. That meant Everton were denied a place in the European Cup not once but again after regaining the title in 1987. It was after their exclusion the second time that Kendall decided he had to leave Goodison Park if he wanted to test himself against Europe’s best.

He had already been approached as a possible replacement for Venables, again, at Barcelona, but the future England manager signed an extension to his contract at Camp Nou. Kendall was then approached by Athletic Bilbao – after a Liverpool executive had put his name forward.

The Geordie boy enjoyed his time in the Basque country, and they liked him, but you can’t help thinking that he could have built a dynasty at Goodison Park in the same way Ferguson did at Old Trafford. He did return, twice: once resigning after the board’s failure to sign Dion Dublin and the other time after being sacked. His suitcase was also unpacked at Manchester City – after he had rejected the job at his boyhood team Newcastle United – Notts County, Sheffield United and twice, unwisely, in Greece.

Kendall was overlooked for the England job when Bobby Robson stood down after the 1990 World Cup finals in Italy. He must have upset someone at the Football Association – probably Peter Swales, the chairman of his then club, Manchester City, who was also on the FA’s international committee – because his CV was far more impressive than that of the man appointed, Graham Taylor.

Since Kendall’s title-winning success in 1987, only one Englishman, Howard Wilkinson, at Leeds United, has managed a side that has won the English league title. Ironically, Wilkinson was appointed after Kendall had turned down the job at Elland Road.

The best of the anecdotes in the book is surely the sleight of hand in signing Dave Watson from Norwich.

Because Kendall wanted the centre-back to join in time for the following Saturday’s game, they met at Villa Park, “midway between Merseyside and Norwich”. Once the forms had been signed, Kendall realised they had missed the 5pm deadline.

“I looked up and there was a clock on the Villa Park wall. So we turned it back an hour and got Dave to stand there and pose signing the form with the clock above his head to prove he’d signed on time to make his debut on Saturday! It worked too: the Football League accepted it and Dave made his debut.”

If only it could be that easy now. It would make Sky Sports’ coverage of transfer deadline day so much more fun. “AND ARSENAL HAVE SIGNED MESUT OZIL, AND WE WILL BE GETTING A PICTURE OF HIM STANDING IN FRONT OF A CLOCK SOON!” screams Jim White.

However much success Kendall had as both a player and a manager, he should have had more. And perhaps in the end it was his fault that his management career petered out, although that is not the feeling one gets from this book, which, by the way, could have done with a bibliography of Kendall’s career.