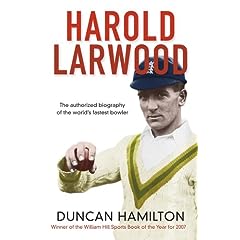 Duncan Hamilton was today announced as the 21st winner of the William Hill Sports Book of the Year for Harold Larwood: The Worldâ€™s Fastest Bowler (Quercus), taking a Â£21,000 cheque and Â£2,000 in free bets from the sponsors.

It is the second time in three years that Hamilton, the author of Provided You Don’t Kiss Me, his 2007 memoir of Brian Clough, has won the “Bookies” Prize, making him only the second author to have won the Sports Book of the Year twice.

“Essential reading,” was the way that Hamilton’s book was described by John Inverdale, one of the judges.

Hamilton, who is finishing work on a book about the 2009 cricket season, paid tribute to the other five short-listed books, agreeing with the organisers that it was among one of the highest quality competitions in the event’s history.

His Larwood biography, which utilises much previously unpublished correspondence by the cricketer, is regarded as an important work on a subject who had not been covered in depth before.

In our overview of the award contenders, Anton Rippon wrote:

“Larwood was Englandâ€™s chief weapon during the 1932-33 â€œBodylineâ€ Ashes series in Australia. But after being used, and abused, by upper-crust captain Douglas Jardine, the former Notts miner refused to be made a scapegoat, wouldnâ€™t apologise and never played for England again. That he later emigrated to Australia and lived happily there for the rest of his life only adds to a story told by Hamilton that is as much about issues of class and social standing in early 20th-century Britain as it is about cricket.”

The announcement was made in a ceremony at Waterstone’s, Piccadilly, London, based on the verdict of a panel of judges that included prominent SJA members Inverdale and Hugh McIlvanney.

“2009 has seen a record number of entries for the William Hill Sports Book of the Year,” said spokesman Graham Sharpe, “and it is therefore no great surprise that this year’s short list is one of the strongest in the Award’s 21 year history.”