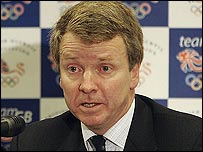 Lord Moynihan, the chairman of the British Olympic Association, has used the occasion of a prize day at a leading independent school to make a call for the state education sector to do more to identify and nurture sporting talent to win medals for Britain at the 2012 Olympics.

Colin Berkeley Moynihan, 4th Baron Moynihan (Monmouth School and Oxford) was the guest of honour at Whitgift School in Croydon last month, where he watched a mini-Modern Pentathlon competition integrated into the usual handshakes and performances of such an end-of-term event.

The 1980 Olympic rowing silver medallist called on the vast majority of Britain’s schools in the state sector to do more to deliver future success.

Citing the example of Britain’s greatest Olympian, five-time rowing gold medallist Sir Steve Redgrave, whose talent was spotted during his time at Marlow School, Lord Moynihan said, “It is worth noting that 60 per cent of our medallists have come from the independent school sector.

“Yet independent schools are attended by only 7 per cent of our children.”

Lord Moynihan’s comments come after a quarter century in which sport in state schools has seen wholesale decline, both in opportunities for training and competition and in terms of facilities. He suggested that in order for Britain to attain fourth place in the medals table at the London Games in six years’ time, state schools will need to take greater care with the talents in their midst.

“We need a much more systematic approach to the identification of and the development of talent,” he said.

Accompanied in his visit by IOC life member Dame Mary Glen-Haig, Lord Moynihan may well have met some future Olympians during his visit to south London. Whitgift staged the prize ceremony in front of 1,500 parents and boys in the hall of its new £4 million sports complex.

The facilities, including a fully equipped gymnasium and 25-metre pool, so impressed the BOA chief that he publicly suggested that the school – which in the past had served as a training base for British Modern Pentathlon teams – could in future be a training hub for visiting Olympic teams.

Boys at Whitgift undoubtedly have privileged access to sports facilities and coaching. The school’s teams have in the past won national schools’ rugby and cricket competitions (Surrey use the school as the venue for their annual festival week), and their under-14s won this year’s national schools’ hockey cup.

Uniquely, the school also has two members of the National Olympic Committee working with its pupils, with Keith Smith, president of the British Fencing Association, and Kate Allenby, the 2000 Olympic Modern Pentathlon bronze medallist, on hand for coaching and advice, prompting Lord Moynihan to speak of a “special relationship” between the school and the BOA.