Leon Mann, founder of the Black Collective of Media in Sport, has called on industry chiefs to introduce diversity in their panels or face a potential boycott – and thanked Raheem Sterling for putting racism in sports media top of the agenda.

SJA committee member Mann was speaking at the launch of The Dword3, a guide on diversity in the sports media.

‘No-one will solve the diversity challenge for us – we all have a role to play here. The health of the industry relies on us getting this right, and swiftly’

He wants to see sports panels which are diverse and urges people who are invited to join them to check whether they are representative before they agree to participate – and refuse if not.

Mann’s passionate plea resonated with a packed house at London’s Living Room, City Hall  on Tuesday night in an event supported by the SJA.

The message was clear. There has to be a visible change of culture, highlighted by England star Sterling’s comments in December which accused newspapers of fuelling racism.

BCOMS has produced some facts and figures which make uncomfortable reading.

There were 338 roles in broadcast and written media who covered the FIFA World Cup, winter Olympics and Paralympics, Wimbledon, Commonwealth Games and the inaugural European Championships. These numbers are based on eight major national newspaper titles and leading broadcast rights holders.

Worrying statistics raised once again about the lack of diversity in sports media. As someone who has experienced it at all levels, I will continue to shout about the importance of diversity in EVERY newsroom. Well done @bcomstweet @Leon_Mann & team.

The work of BCOMs is needed pic.twitter.com/04OTlNFuV2 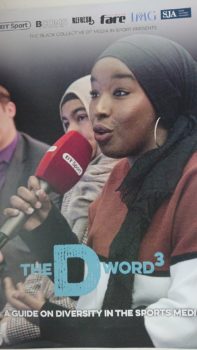 44.7 – per cent of respondents to a survey by Sports Media LGBT said they have personally witnessed or been subjected to anti-LGBT language or behaviour in a sports media industry workplace setting in the last two years

7 – out of 338 roles given to Asian sports journalists

1 – black writer across 63 roles at the World Cup

Mann said: “Please don’t let this guide sit in a file you never open. Make it highly visible and use it as a reminder to everyone in your workplace that we have work to do.

“No-one will solve the diversity challenge for us – we all have a role to play here. The health of the industry relies on us getting this right, and swiftly.”