Later this summer, the athletics World Championships will be staged in Osaka, Japan. Here, in an article reproduced from the 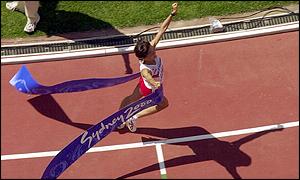 BAWA’s newsletter, David Hueston, of Kyodo News, offers some personal advice on how to get around and where to go for food, drink, culture and electronics

Getting around Osaka is quite simple, since it is basically divided into two areas: Kita and Minami. Osaka also possesses a solid subway network, which features a JR loop line (kanjo-sen in Japanese) that circles the city area. Unless you stay out late (after midnight) and miss the last train, you can depend on the train and subway systems to get you to your destinations.

Kita (Japanese for north) is the city’s business hub and contains two of its largest train stations, Hankyu Umeda and JR Osaka. Arguably the biggest attraction of this area is the futuristic Umeda Sky Building, which contains an outdoor observation deck on the roof and an indoor gallery on the floor below each offering spectacular views. The building is located just north-west of Osaka station and can be reached via an underground passageway.

Travelling to Osaka would mean nothing without a visit to Osaka-jo (Osaka Castle) and its surrounding park. It houses an impressive collection of artefacts related to the castle and the city of Osaka, as well as an observation deck on the eighth floor.

The main entrance to the park, the Ote-mon gate, is a 10-minute walk north east of Tanimachi 4-chome station on the Chuo and Tanimachi subway lines. Another way to get there is to take the JR loop line and get off at Osaka-jo-koen station. Just southwest of Osaka-jo is the Osaka Museum of History. The displays (on the 7th-10th floors) can be viewed in chronological order, starting your way from the top floor.

Osaka by night
When evening breaks, it’s time to venture off to Minami (Japanese for south) for Osaka’s entertaining nightlife. It’s just a few stops south of Osaka station on the Mido-suji line. Getting off at either Shinsaibashi or Namba staions, you will find a plethora of restaurants, bars and clubs packed full of people ready to party.

The flashiest area by far is Dotonbori, where you can view the glittery neon lights from Ebisu-bashi bridge. It was once notorious as Osaka’s number one pick-up spot (Hikkake-bashi in Japanese) and sits right under the famous Glico running man billboard sign. Partygoers often gather here as place of meeting before heading out for a night on the town.

“Eating till you drop” (or kuidaore in Japanese) should be one of your main objectives in this area that features a mind-boggling array of food. Some key restaurants include the Kinryu (Golden Dragon) ramen chain (there are three shops in

the area, open 24 hours) and Kani-Doraku, a crab restaurant recognisable by the giant moving crab billboard.

Otakoya, a famous takoyaki (baked octopus) stand (beware the long queues), Cui-daore, and Hariju (a restaurant that uses only Japanese beef) also feature among Osaka’s heartiest cuisine in the area.

When it’s time to unwind for a drink or two, you can sally forth to the clubs in Dotonbori, Shinsaibashi, Namba and Amerika-Mura. One of the best clubs with great dance music and wild party atmosphere is Sam & Dave Shinsaibashi.

Some of the more trendy spots include, American Beauty, Murphy’s and the Pig & Whistle (a longstanding British-style pub chain with pints of Guinness and fish and chips). Check out Kansai Time Out for listings and locations.

Amerika-Mura (American Village) is a condensed enclave of trendy restaurants and shops. Teens with truly bizarre fashion sense hang out here, especially in Triangle Park. The area, which also contains a few discreet love hotels, is legendary in Osaka.

The Naniwa Kuishinbo Yokocho is a food court in the Tempozan Marketplace where you can sample all of Osaka’s culinary delights.

For more on the IAAF World Championships, visit the event’s website by clicking here.