VANCOUVER DIARY: For the past decade, a word no one who is connected with staging an Olympic Games wants to hear is “Atlanta”. But it is being whispered in Whistler as criticisms mount

Canadians have long been accused of having a form of inferiority complex because of their bigger neighbours to the south (take a look at this barbed critique, from their friends in Seattle). But after just a few tough days of the Vancouver Games, matters seem to be getting under the Canadians’ skin.

After the luge death on their superfast track, the faulty Olympic flame cauldron, the rain and lack of snow, the resulting postponements of events and the cancelling of spectator tickets worth at least Can$1 million, and complaints about the transport system, the Canadians have turned their ire on who else but… the British press.

In a classic case of shooting the messenger, Canadian Olympic officials at yesterday’s official media briefing tried to pass the buck for mounting frustrations with the Games organisation on British journalists, and mainly “by people who are not here”.

Renee Smith-Valade, VANOC’s communications chief, was on the defensive: “The spectators are happy, the athletes are happy.

“We are surprised about the some of the impressions of the Games, it shocks me a lot… Everyone has a different perspective but it definitely feels like some reporters are filing from somewhere else.”

The National Post – the newspaper established by that paragon of Canadian virtues, Conrad Black – went into full paranoid mode, thrashing about with attacks against the Daily Mail‘s Neil Wilson and Ian Chadband, of the Daily Telegraph:

“Fleet Street’s finest have a problem: no Brits have so far been seen near a podium. Or have much chance, except in curling, bobsleigh and skeleton. This leaves reporters casting about for something to write about to justify the huge expense of sending them to British North California. Underpinning it all is the schadenfreudesque hope Vancouver will be such a dud it will make the London Olympics look good”

Off the buses
The unseasonally warm, snow-melting weather has not been the only problem for the Vancouver/Whistler organisers. With a split-centre Games, transportation is critical for competitors, media and spectators alike.

In Turin four years ago, the split centre worked pretty well, with most of the indoor, ice events in the city, and the snow-dependent sports up in the Alps.

But the Olympics’ most dreaded word – “Atlanta” – has already been heard to be muttered in relation to transport in Vancouver.

“I don’t have the numbers for you as to the number of buses that have broken down or the number of spectators who haven’t made the venue,” Smith-Valade said on Sunday.

“But what I can tell you is that we’ve added 100 additional buses to the transportation system and we’re absolutely committed to making sure that spectators make it to their venues, that they have an enjoyable transportation experience bearing in mind that it’s a complex system. There are thousands of buses; there are hundreds of drivers, there are nine transportation hubs.

“We’re having some teething issues, there’s no question, but we’re working on them every day.”

□ Vancouver stat: Number of competitors in British Olympic team: 52. Number of BBC staff in Vancouver working on the Games: 74.

NBC boosted by Olympic ratings
For NBC, the American broadcaster that effectively bankrolls the IOC, the timings of events in Vancouver might be regarded as something of an inconvenience – many happening during the daytime, even for its west coast viewers. To get round this, as with previous Games, NBC has played around with time a little, holding back much coverage until it goes out on tape delay at peak times.

So far, the results have been promising, though there is the dark suspicion that NBC’s strong ratings over the weekend may be related to the station having shown clips of luger Nodar Kumaritashvili’s crash until Sunday.

For the first time in a long while, NBC is leading the way in American TV ratings. An average of 28.6 million viewers has watched each night, according to the Hollywood Reporter.

By a ratings standard, the NBC Olympic coverage has been a rare success for the network – yet even that may not be enough. Before the Games started, it was projected that NBC would lose more than £100 million from its investment – shrewdly, the IOC insists on broadcasters buying in a package of the Winter Games as well as the Summer Games, which are usually more attractive to advertisers.

Raining on the parade
Melting snow at Cypress Mountain is already seeing it described as the most jinxed Olympic venue, ever.

Organisers had to refund more than 24,000 tickets for Monday and Tuesday’s snowboardcross, the men’s and women’s halfpipe, ski cross and snowboarding parallel giant slalom events. The grandstands at Cypress Mountain depend on large volumes of snow to support their structures. Without snow, the stands are unsafe. 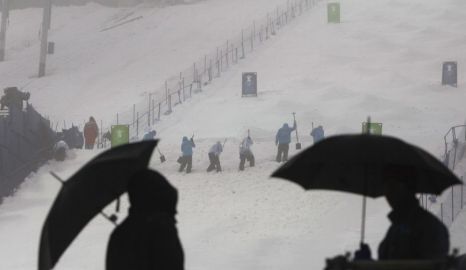 Rain had washed away nearly a foot of snow. With cancellations yesterday, the decision is expected to cost VANOC nearly Can$1.5 million.

Organisers had been struggling since the turn of the year to prepare the Cypress Mountain venue. More than 300 truckloads of snow had to be bussed down the mountains to help with the construction of the courses, including the halfpipe, moguls run and snowboardcross track.

The Games must go on. Mustn’t they?
Neil Wilson, in his Daily Mail Vancouver blog, makes some trenchant points about the manner in which the Winter Olympics carried on regardless after Friday’s tragic accident on the luge course.

“Luge here is a sideshow,” Wilson writes. “This place is a business. A resort that is bankrupt cannot stop for a moment to consider the fate of a young man who knew the risks he was taking. Anymore than could the IOC, as deep as it is in hock to television companies screening the death in high definition.

□ Over at The Times, Rick Broadbent takes a slightly different tack. He says he loves Vancouver.

“What Vancouver is finding is that the Olympics are all about moaning. It is the same in England, where we will spend three years criticising the costs and delays and politics and choice of The Cheeky Girls to do the opening ceremony, but still love the damn thing when it happens.”

But then, Broadbent also got invited to a cocktail party with Cindy Crawford. Tough life this sportswriting malarkey.

□ For those of you who think that a “failure in waxing” is something to do with going out with a woman with hairy legs, spare a thought for the Norwegian cross-country skiing team.

Norway are to cross-country skiing what Kenyans are to the steeplechase on the athletics track, so when their top men’s skier finished 41st in the Olympics in Vancouver on Monday, there was nothing short of a national inquiry ordered out of Oslo.

Apparently, just like British Rail, it was all down to the wrong sort of wax (on their skis, not their legs). And to think that they laughed at Eddie the Eagle.

All downhill with BBC Vancouver coverage

Snow-less Vancouver and the long road to London