LONDON CALLING: The final page ripped from KEVIN MACEY’s cartoon sketchbook. Plus an alternative Olympic medals table, the Radnedges’ family Games, and a proposal for a new name for London’s Olympic Stadium 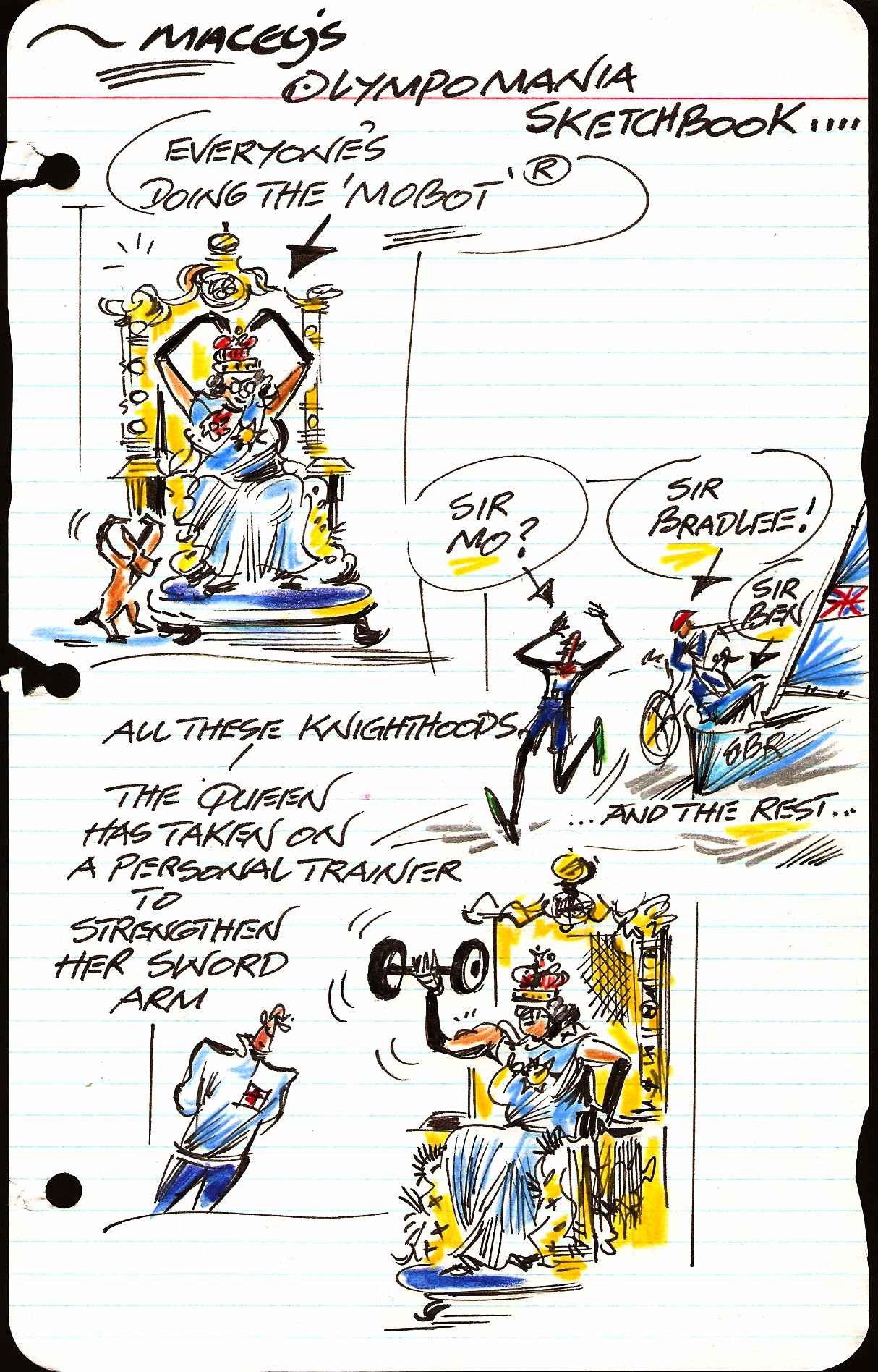 The late Don Anthony was a regular correspondent to this website, often on the subject of the Olympic medals table. The reason being that, according to the noted Olympic historian, there really was no place at the Games for a medals table at all, and certainly nothing “official” about it.

Which, in an ideal, non-flag-waving world, would be the case, but even the IOC embraced the notion of an official medals table years ago (probably about the time that the first mega-bucks deal with American broadcasters NBC was done).

At least the Wall Street Journal has done its bit to redress the balance towards de Coubertin’s ideal of “the taking part” being as important as the winning, by working out an Olympic Losers’ Table.

And just as the Great Britain team soared to third place on the medals table, so they have also excelled in the losers’ table, too.

In the WSJ‘s tally of countries with the most last-three finishes, the Brits – with entries in every sport as befits the host nation – have eight last-place finishes, 11 second-to-last finishes and 12 third-to-last finishes. The total of 31 is eight more than its next closest competitor, Ukraine.

There’s something very, well, British about being represented at the top of both of these tables. De Coubertin would have been proud. Let’s hope that come Rio 2016, Britain again gets teams qualified for sports such as volleyball and water polo, where we had not qualified teams for global events for half a century.

Talking of NBC, it was interesting to note that the American network’s chief Dick Ebersol attacked the BBC’s coverage of the London Games as being too nationalistic. Yes, the same NBC which opted to show the men’s 100 metres final on tape-delay.  “The BBC will cut away from races to show a British athlete who is finishing fifth. They openly root for their athletes on the air. It’s a different approach, but we have never done that,” Ebersol is supposed to have said.

Charlie Sale’s column in the Daily Mail got a reaction from the BBC which must be among the candidates for Quotes of the Games: “Has he ever watched his own channel?”

A final word on Info-minus

Complaints to LOCOG’s media department about the costly Info+ system failed to get some key issues fixed. Journalists on deadline would find themselves logged off the system, unable to file, because they had been “inactive” on the Info+ system (£150 plus VAT remember) for more than a few minutes at a time.

And navigating the arcane system for results and start lists for particular events often required a virtual map and compass. “Whoever designed the site seemed to have little understanding of the sports, and undoubtedly had never worked as a journalist,” one disgruntled Olympic correspondent, £180 poorer for the experience, told sportsjournalists.co.uk.

Notes from a Small Island

Other Americans saw Olympic matters differently from NBC. Take Bill Simmons, for instance, the editor-in-chief of Grantland, the ESPN-owned online sports fest. Simmons’s long-form essays on the Games are well worth a visit.

Simmons, a noted basketball writer, arrived in London and confronted the initial problem: what to choose from the Games timetable. “Later today, I plan on bringing that schedule to a local pub, ordering some obscure draft beer with a 10-letter name, sitting outside, inhaling cancerous clouds of secondhand smoke and determining my plan for the weekend. Maybe the sun will be shining, maybe not. I’m not sure it matters.”

And there was this on being in the Olympic Stadium on the night of Bolt’s 100 metres final:

“In the stands, you could only hear this sound: “Whooooooooooooooooaaaaaaa!” Bolt ripped through the finish line in 9.63 seconds, dragging the field with him — including poor Tyson Gay, who submitted the fifth-fastest time in Olympic history and somehow didn’t medal. Maybe we didn’t witness a new world record, but we saw an Olympic record. And better than that, we watched someone become immortal. Fifty years from now, my grandkids will ask me if I ever saw Usain Bolt run at the Olympics. I will say yes. They will be impressed.

(And no, they probably won’t be as interested in the rest of the 2012 Olympics, and how everything magically fell into place for London for two weeks … but I will tell them that story, too.)”

All recommended. Click here to read this article, and more.

Sailing past a name dropper

Oh dear. You spend a lifetime in pursuit of excellence, become known as “Britain’s best sailor, ever”, win a fourth Olympic gold medal. And STILL the subs can’t manage to spell your name right… 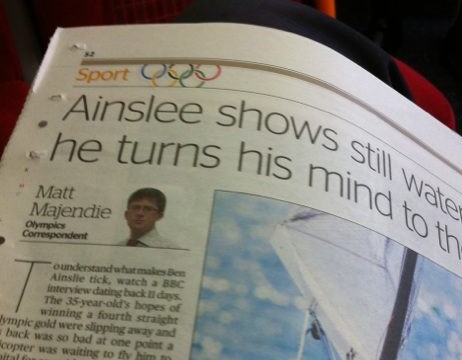 The eagle-eyed among you will notice that the London Evening Standard‘s Olympics Correspondent Matt Majendie’s copy does manage to spell Ben Ainslie’s name correctly.

Where the nuts come from

Things in four years’ time will be different. For a start, the Tio 2016 organisers are proposing to name their athletics stadium after a water polo player.

Not any old water polo player, mind you, but João Havelange, the demonstrably corrupting former head of Fifa who, in 1936, played water-polo at the Berlin Olympics.

Havelange, now 96, along with his former son-in-law whom he got on to Fifa’s governing executive, Ricardo Teixeira, have been judged in a Swiss court to have taken millions of pounds in bribes from ISL, the marketing company. This has not deterred the Brazilians from deciding to name their track and field stadium after the old shuckster.

So we thought we’d start a campaign to put a name to the London Olympic Stadium, to properly recognise a former British track star, who became a Tory politician, was then made a Lord, and who was finally caught out for telling massive porkies.

That’s right, the Lord Jeffrey Archer Stadium. Or maybe not.