Many of Britain’s sportswriters and photographers have been recognised by AIPS for long service in covering the Olympic Games. 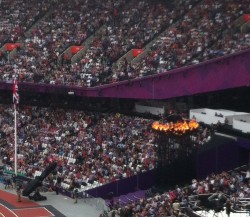