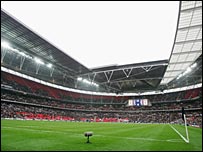 By Steven Downes
Half a minute into the first match at the new Wembley, and the swish scoreboard would have delighted all Scots: England 0, The Opposition 1.

Maybe the intensity of the crowd noise at the end of the national anthems had sent a chill down the spines of the young England defenders, for they looked frozen to the spot in those opening seconds. The Wembley Roar of old was replaced for the moment by a muted sigh of disbelief from 60,000 people.

So Gianpaolo Pazzini will be the answer to at least four questions in pub quizzes for years to come. The Fiorentina and Italy under-21 forward kicked off the first game at the stadium, and then scored the first and what is sure to remain for some time the quickest goal – 28sec – at the Â£750 million English National Stadium.

Just over an hour later, and Pazzini completed an accomplished hat-trick, another new Wembley first, another quiz question answered, to conclude the scoring in a 3-3 draw which was a bit of a curate’s egg of a game, but which was played out in what the high-ups at the FA will, after all, be justified in claiming to be the best stadium in the world.

Years late, cursed by technical problems and contractor disputes, and costing nearly twice its original estimate, on this evidence at least, the world’s most expensive stadium is a venue to take pride in. Wembley will also be the benchmark against which all other 2012 Olympic venues will have to be measured.

Its grey vastness looms out of the north London skyline. It can be seen from Primrose Hill, close to the centre of the capital, while pilgrims approaching on the Tube catch their first glimpse as their train emerges from the tunnel more than two stops away.

The massive arch, necessary to work the stadium’s sliding roof but suspected of being a piece of architect’s fancy, is a worthy landmark to replace the iconic Twin Towers of yesteryear. It is so massive that if a benign giant wanted to play hoopla with the London Eye, he might roll

the Ferris wheel under the Wembley arch, and still have space to spare.

Yesterday’s was the second of two dry runs at Wembley, at the behest of the health and safety people. After last weekend’s community day, this was the first proper match, with the stadium operating at two-thirds capacity. Even that was good enough to deliver the new stadium’s first world record, for the attendance at an under-21 international. Such was the public demand for the chance to return to the emotional home of English football that all tickets sold out within hours of going on sale.

Rough edges around the press box
The press facilities are, as you might expect, slick, although there are one or two rough edges that will need attention between now and May’s Cup final.

The online form that you are expected to print off and bring with you on the day, together with passport or driver’s licence as form of ID, does not offer any indication as to where you might find the media entrance at the new stadium, and there are no signs to assist in your quest until you have already located the entrance. Nor did any of the tabarded stewards that I asked know where I needed to go. I think that the entrance is roughly where it used to be, but after a seven-year wait, it is all a little disorientating. Immediately outside the ground remains a building site and Wembley Way is still just a grubby, grotty funnel for pouring tens of thousands of punters on to trains after matches or concerts.

For future reference, it took just an hour from East Croydon – the opposite side of London – by train and the speedy Jubilee Line to Wembley Park’s new platforms. Then it is a walk straight to the top end of Wembley Way for the main entrance and press access, slipping below the main level, to be greeted by one of two accreditation desks that hand out three security passes – one to go around your neck, one around your wrist and one to attach to your bag.

There can be a long wait for a lift, followed by a trek through corridors to one of two media lounges. At this match, half-time grub was served after half-time and the one and only coffee and tea machine groaned under the weight of demand. It would have been easier to get a pint of lager.

There were no public phones in my media lounge – none had been installed. If you need a phone at your desk, it takes a week to book. I was informed of this in the press pack I was handed upon arrival. The tribune is equipped with possibly the most comfortable press seats ever, and some desks in the tribune had mini TV screens – looking like my kids’ Gameboy – though I was positioned so far from the centre of the box that I had to rely on the main scoreboard screens. These, though, are splendidly state of the art and more than adequate. In fact, viewing from the press seats is so good that you really miss nothing.

But I had been assured in the week that wireless internet access would be available. It was not. There are cables at every desk for access to Wembley’s own internet system. But this requires a password, and the press officers on duty at this match were preoccupied with their mobile phones and some last-minute sorting out of access to the mixed zone, so despite three requests for the access code, no one was available to provide one when required.

These are all practical, press grumbles, and ought to be fixable. Certainly the experience of spectators at the event, with their new seats nearly 3in broader than the old stadium, was positive.

Once-in-a-lifetime experience
One fan, Dave, who had not had to travel far from his Tottenham home, had managed to get a Â£10 ticket off the internet, but was better than delighted with his seat in the lower reaches of the North Stand – below the Royal Box, but over the players’ tunnel, now positioned at the halfway line.

After the game, as the players returned down the industrial steel stairway from the Royal Box, Dave yelled at Tom Huddlestone, one of his Spurs heroes, and was able to snatch of photograph with the player.

“My seat was great, the view was tremendous, but this was just unbelievable,” said Dave of his once-in-a-lifetime experience. Whether such easy access remains unaltered when the FA Cup final – potentially between Manchester United and Chelsea – is staged here in May must be very doubtful.

The 107 steps from pitch to the Royal Box, which see the players at one point disappear from view into a corridor, presents an inelegant route to collect the trophies, a retrograde step compared to what was one of the most famous walks in world football.

But in most other respects, all is improved. I was last there for the last old Wembley FA Cup final in 2000, where at halftime, the golden-coloured waterfall at the back of the stand was testament as much to the lack of toilets in the old ground as to the amount of ale drunk by the spectators in the build-up.

The old Stadium of Legends had long before become the Stadium of Fag-ends, where the midweek dog-racing added a touch of class. It has been replaced by an arena where the view from most seats is all HD, but in 3D, and with full sensurround sound.

With the open roof nonetheless keeping the sound in, the atmosphere, even at two-thirds capacity for a game which lacked the sort of intensity of a full international, was exactly what its designers must have hoped for.

And England even had a player, wearing No7, called David, surname beginning with a B, who looked good enough to grace such a stage. Blackburnâ€™s David Bentley, naturally left-footed but here played on the right, was the class act on show for England, his 25-yard screamer from a free kick that made it 1-1 as good as anything that Beckham might have hit. The goal celebration had similarities, too.

Wayne Routledge and Matt Derbyshire twice put England ahead, only for Pazzini to get the Italians back on terms twice. The new Wembley might not yet be a fortress for English football, but yesterdayâ€™s result at least allowed the possibility that Scotland might yet be the answer to another pub quiz question: What was the first country to beat England at the new Wembley?

This is an version of an article that first appeared in the Sunday Herald.